I was in particular looking for the cipher tables of Samuel Pepys, but it seems those are a secret on themselves… But how difficult could this be?

Klaus Schmeh mentions. In his book “The Codebreakers”, David Kahn mentions a paper titled “On the  Cipher of Pepys’s Diary” by John Eglington Baily from 1876. Maybe, this work is available somewhere. Not possible to get it. So I searched further.

We read here, http://www.pepys.info/bits.html  that we have a shorthand system, but also “coded passages”.  Thus, we have two systems.
The publication can be read here (1897 HRW)

History overview on wiki or here or here on the code.

But still….no code page, shorthand overview or something like it. Pepys.info mentions:

On February 5th 1667 he even manages some stimulation with Betty while sitting next to his wife:
“I did come to sit avec Betty Michell, and there had her main, which elle did give me very frankly now, and did hazer whatever I voudrais avec l’, which did plaisir me grandement”
His French is clear – avec = with, main = hand, elle = she, hazer = make, voudrais avec la = would have with her, plaisir = pleasure, grandement = greatly, besar = kiss

…Tomalin explains that his garbled foreign phrases heightened his pleasure by marking sexual experiences with special words:
tocar = touch, ella = she, su = her, abaxo = below, douce = soft, mamelles = breasts, lay long hazendo doz vezes con mi moher on grando pleasure to me and ella = lay long making love with my wife to the great pleasure of us both.

Does that mean there was no real cipher, but he uses code-words?

A reference was made to Thomas Shelton (1600/01–1650(?)) was an English stenographer and the inventor of a much-used British 17th- and 18th-century stenography.

The full book is here

The vowels were designated by the height of the following consonant.

See the images on wikipedia.

If there was a vowel at the end of a word, a dot was used. For initial vowels there are special symbols, as well as frequent things.

Shelton’s shorthand was used, amongst others, by Samuel Pepys, Sir Isaac Newton and US-President Thomas Jefferson.

And that solves the entire riddle:

Shelton’s shorthand didn’t use vowels and marked them by putting a second consonant small and in a particular position relative to the first consonant.

Further comments tells us: in the 1660 Tomalin’s book, the symbol for ‘the’ is a slanty line like a comma, ‘of’ is like a hooked ‘i’ without a dot, and the first word to be spelled out completely by its consonants is “year”. (Emilio-from here)

And from Todd Bernhardt of that same page:

“In addition, Pepys has often added words, phrases and sentences. These he inserts over a line or in the margins, though sometimes he crowds them in to the spaces between paragraphs and daily entries … Other peculiarities of the manuscript … are the sections that Pepys, for various reasons, writes in extremely small characters or in very large ones…

11. ‘Obscurities.’ Pepys’s shorthand is almost always extraordinarily neat and clear; even the passages written in minute characters are all very distinct. Sections written when his eyes were very painful are large and commonly less precise than elsewhere, but they, too, give little trouble to the editor.
Nevertheless, a few shorthand forms are illegible, or almost so, because of blots or poor writing. His longhand, which is less clear than his shorthand, also contains a few doubtful readings. And there are occasions where the inefficiencies of Shelton’s stenography makes for ambiguity.” 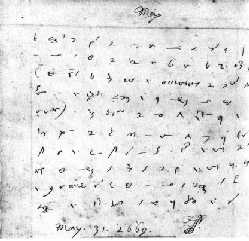