The strange f73r zodiac on octobre sign puzzled me, but after i found the connection to Norse Myths and Yggdrasil it came clear there are some possibilities they connect to Yggdrasil.

This is the animal on f73r: 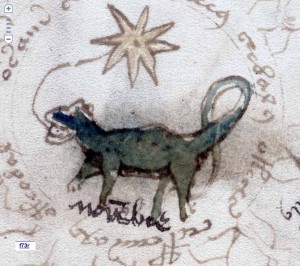 It is perhaps a squirrel (Icelandic: íkorna, Norwegian: ekorn, Rune Proto-Norse …) or a reindeer or a dragon or …?

The squirrel
The poem Grímnismál (Sayings of Grímnir) states that a squirrel named Ratatoskr must run across Yggdrasil and bring “the eagle’s word” from above to below to another animal (Níðhöggr).

Below is an example image from the 17th century ! 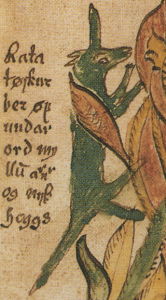 From the en:17th centuryen:Icelandic manuscript AM 738 4to, now in the care of the Árni Magnússon Institute in Iceland.

Normally a squirrel has no horns and there is no reason why it should here, therefore I searched for other mediaval squirrels and found some that really have other tails.

The illustration is from a fourteenth century Book of Hours of the use of S.-Arnoul-les-Metz. It is now in the collection of the Beinecke Library at Yale University

Library, Yale University. Image believed to be in the public domain.

I think it is not the squirrel because the tail on ‘octobre’ is much longer, and the claws of the squirrel are different.

The (rein)deer
In Norse mythology, four stags or harts (male Red Deer) eat among the branches of the World Tree Yggdrasill. Their names are given as Dáinn, Dvalinn, Duneyrrand Duraþrór.
The tail seems to mathc, but since a reindeer has two horns and ‘octobre’ has none it is not this reindeer. 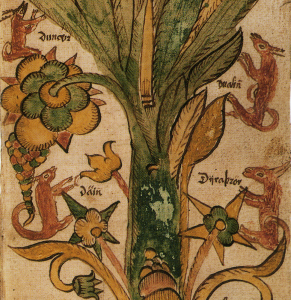 The dragon
In Norse mythology, Níðhöggr (Malice Striker, often anglicized Nidhogg) is a dragon who gnaws at a root of the World Tree, Yggdrasil. There are many dragons online, but very few medieval dragons i found which are linked to Yggdrasil. Because of the long tail and dinosaur-like-appearance  for ‘octobre’ the dragon Nidhogg resembles nicely.

The Ahma
The ‘secret’ animal that lives in Finland, is the Ahma. As far i found none connection from the Ahma with mythology or paganism.

The Finnish name is ahma, derived from ahmatti, which is translated as “glutton”. Similarly, the Estonian name is ahm, with the equivalent meaning to the Finnish name. In Lithuanian is ernis, in Latvian—tinis or āmrija.  Other Finnisch names are: Ahma (Gulo gulo), osma, osmo, kätkä (Sami language geatki), kamppi, wolverine.  For more info go to the links.

There live now about 100-150 of these strong animals in Finland and Zweden.

The tail is not as long as the picture, but for the rest, it resembles very well. 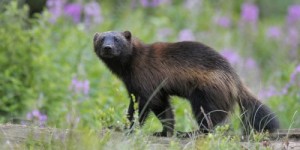 Again the animal on f73r: notice that it has a star.

That means (see page stars) that this animal is god-like ?
The only God-like person that represents such is …?   Odin?

Have a look at the picture Azoth mandale about the ‘The Emerald Tablet’.
(link http://en.wikipedia.org/wiki/Azoth)  And look in the left top corner.

The picture appears to come from 14 plates within a 17th century alchemical picture book called Azoth of the Philosophers. If Basilius Valentinus, German monk and alchemist, wrote this and drew the picture is not clear. Perhaps Johann Thölde (1565-1614) did it.

On the http://virtualani.org/tigranhonents/index.htm i found this picture and text

Or is it a lion? (source http://virtualani.org/walls/index.htm) 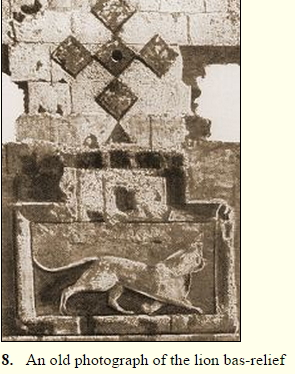 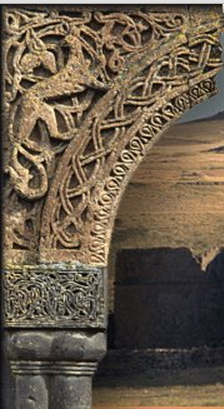 And that last one from ANI. Armenia ? looks almost identical.