The Voynich script has not yet been translated.
The ‘interlinear transcription’ is a source where each character in the VMS alphabet is transcribed to our ‘Latin Alphabet’. But that text is still not deciphered.

The 25 letters in the EVA alphabet (EVA alfabet)  are defined as: 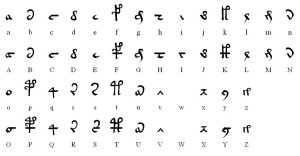 Then there are an extended EVA characters and doodles: (for example, under Windows, &131; is ALT +0131 if you have the font installed). 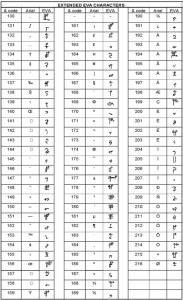 The most common used characters are: 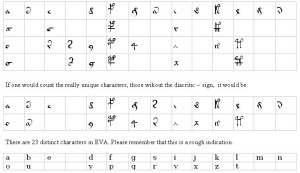 If we count the unique repetitive characters there are only about 22 or 23 (notice that k and z are actually the same character).

are  found as ligature on this Bronze Age Axe found at Gotland in Sweden.
link: http://commons.wikimedia.org/wiki/File:Bronze_age_axe_with_a_runic_symbol_found_at_Gotland_Sweden.jpg 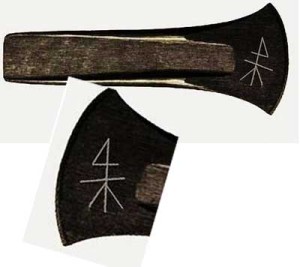 The quincunx was originally a coin issued by the Roman Republic c. 211–200 BC.
Now mainly used as astrological symbol.

But hey, also the Korean (The Hangeul alphabet, see the hijeut) and Chinese have such a similar symbol 😉

Significant characters
In the VMS there are characters that are very specificly significant for the writing-language; if one could find the meaning or an resemblance on these, the remaining characters would then follow from that discovery. These signifant characters are:

It does not mean that these char’s are the most important, but this: if you would have found a language (not as numerals of course) or a (hand)written text that has 2 or more of the char’s form this row, it is very likely you found the entire VMS language.

If you want to see another match, have a look here, there you can see the 8 (a letter g) and the 9, being in medieval Welsh. There they also have the digraph LL and i hoped to see the EVA ‘k’ in the old Welsh, but unfortunately i did not find it. Anyway the Welsh use to much diacritics to resemble the VMS. Or do you see possibilities ?

f57v
Accidently, i also get 17 characters if i would take all char’s from f57v second circle which are repetitive, remove redundant char’s that are not actual in normal text, and then add the characters which are common used (a,b,g, i, n,o,q,s)  in reserve: j). The totale Eva char’s are then: o l d r k m f t y a b g i n o q s and in reserve: j.

Of course i searched for ancient alphabets with 17 characters. There seems to be one named italian perinsula also known as the alphabet of Lugano (Lepontic). I researched it a bit and since Lugano is now in Switzerland, there are also two or three castles and there is a monastery. That monastery is Franciscan and has it’s own library. This old Franciscan (1535) monastery ‘Santa Maria del Bigorio‘ is now open for public (to pay their bills).

The old church ‘Chiesa Santa Maria degli Angeli’ was originally part of the monastery.
Have a look at the  painting on those walls. Or what about this one (Madonna degli Angioli)

The district of Lugano has 59 municipalities divided in 12 sub-districts, they call it circles themselves. ( 😉 but i think it has nothing to do with Ros2)

Lugano is also the capital city of the district.

Cattedrale di San Lorenzo
Another famous ojbject is this cathedral. With 1 high tower. Building took place from 1118 till 1522. With very nice fresco’s and with some relics from the (Hebrew) saint John the Baptist.

Romansh is a descendant of the spoken Latin language of the Roman Empire, which replaced the Celtic and Raetic languages previously spoken in the area by the 5th century AD, though Romansh retains a small number of words from these languages. Romansh has also been heavily influenced by German in vocabulary and morphosyntax. The language gradually retreated to its current area over the centuries, being replaced by Alemannic and Bavarian dialects.
The earliest writing identified as Romansh dates from the 10th or 11th century.

After analysis 1, you will see that these are the most common letters used in the VMS:

the percentage is mentioned in the rows