The double-headed eagle was adopted as a symbol for high-ranking members of the imperial family (including the Emperor), during the Palaiologos dynasty period.

And the scratches reminded me of the  pages 66v and  f86v3

Related are the “chicken” pages here over at Nick Pelling’s blog and here.
After some research it appears that the only crown with the spikes that resemble the “fire aspect” in the central circle on the Rosette page is the crown of John VIII Palaiologos. He was Byzantine Emperor from 1425 to 1448.

His visit to Italy, to the Council of Florence (that started as the Council of Ferrara but was moved to Florence because of the Plague) and to Pope Eugenius IV in 1437 had an tremendous influence on Italian society in that time. The painting was made by the Florentine painter Benozzo Gozzoli to commemorate this visit.  All of them are wearing a crown that is identical to the Byzantine crown on the painting of John VIII. 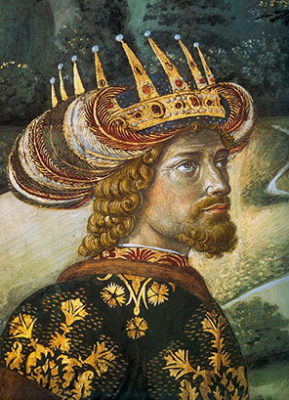