The basis for this page follows from the folio details: 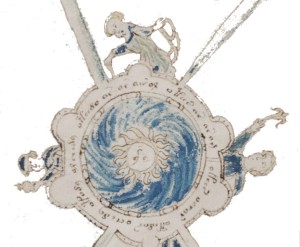 We see 3 persons holding something.

The person on the right is holding the symbol of Toscany or something like the fleur-de-lis. 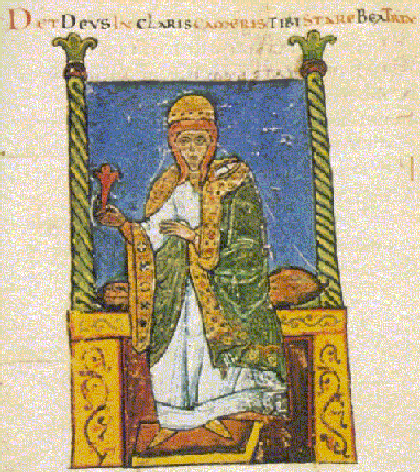 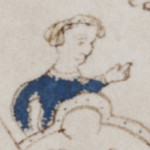 Does he represent a person like a bishop with a ring pointing somewhere?

The ring worn in the Middle Ages had a different meaning and purpose than today. True tradition and history had nothing to do with modern commercial extravaganza. The first evidence about the use of rings as a promise of love was dated back in the days of the Roman comedian Plautus in the 2nd century. The wedding rings were famous because of the inscriptions carried in their inner band that looked like contracts signed in the emperor. This custom not only continued but was christened around the 4th century by St. Augustine who implored the priests not to perform marriages without wedding rings. The Byzantine wedding rings were just thin sheets of gold with round or oval designs depicting the couple either staring each other or accepting the blessing of Christ for their union.

Maximilian, the Archduke of Austria
In the late Middle Ages there were four types of rings:

1. The ecclesiastical rings, brooches and utensils with sacred emblems,
2. The therapeutic rings for the treatment of diseases,
3. Rings with romantic aspects, like wedding rings and
4. Rings with practical purposes, such as seals etc.

Each of the above categories was only a privilege of the nobility. Privileges reserved for the nobles in order to differ from the rest of the people were established by specific laws that defined what ordinary people was allowed to wear and what not.

An act of Saint Louis (Louis IX, of France, 1214-1270) created a prestigious law for the maintenance of a stock of diamonds for the King, testifies how rare diamonds were and the value that was attributed to them at that time. With this Order, Louis I gave the Kings the right to wear diamonds only kings, thus excluding all women. In 1283 an English law forbade ordinary people to have diamonds in their possession. The ultimate goal of this law was to ban exchange export, since all the jewelry were imported from abroad.

In 1447 the Archduke Maximilian of Austria was the first man in history who gave a diamond ring to Mary of Burgundy as an engagement ring. This became a tradition later on and now engagement rings are a custom and a sign of everlasting love and commitment. Of course this could be a tradition of the Roman times too, because they used to connect diamonds with supernatural powers, like restoring the disturbed relations of a couple.

Rings in the VMS: 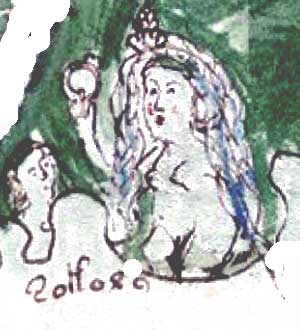 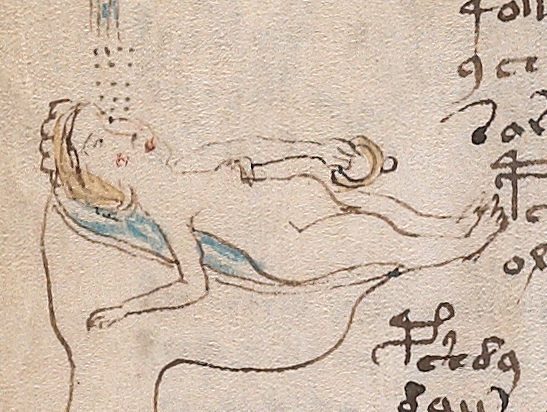 At first i thought that the meaning of this item could be found in Iconologica, although the year of print was later (1645) than the VMS, i hoped that the symbolic meaning would be identical:

The entire page shows that the holy Ceres shows that

so i thought it was a key.

and the calendar with English saints (ff. 1v-13r) showed

St Edward, king and martyr, crowned and holding a ring (18th) (the giving of a ring to a beggar is a story derived from the life of St Edward the Confessor, whose feast day is 13th October) 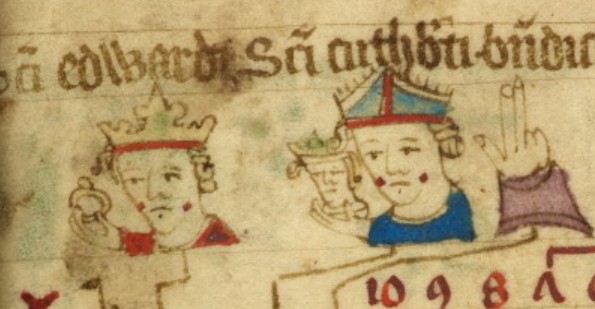 Which clearly shows the symbolic meaning:

the giving of a ring

St. Edward the Confessor
Edward gave away large sums of money to the poor and for religious purposes, especially the founding of churches and abbeys.
…
Edward was said to have the gift of prophesy.
There were several instances where he predicted the outcome of battles or royal conflicts. The most prominent is his vision of Svein junior, king of Denmark, drowning when embarking to invade and conquer England.
Edward cured an Irish cripple, by the name of Gillomichael, by carrying him on his back from his palace to Westminster abbey on the orders of St. Peter, to whom Edward had a strong devotion.

The most well known miracle, or at least the most depicted in artwork, is the story of the ring that Edward gave to St. John the Evangelist. In the account, while dedicating a church to St. John, Edward gives a ring to a beggar who in fact, is St. John in disguise.

Other symbols can be found here in this ms as well, that are interesting for the vms !!

The giving of a ring in  Verse_of_Wilayah

“The 24th of Thi Alhujja, was the day when the Commander of The Faithful AS Gave charity with a ring ,while he was praying.
Due to the importance of this anniversary, and the moral concepts included in, and its deep meanings, Allah the Almighty sent a verse about it, the Almighty said: (Only Allah is your Wali and His Messenger and those who believe, those who keep up prayers and pay the poor-rate while they bow. 5:55)”

The other possible matches between the VMS and the Saints in the Harley are: 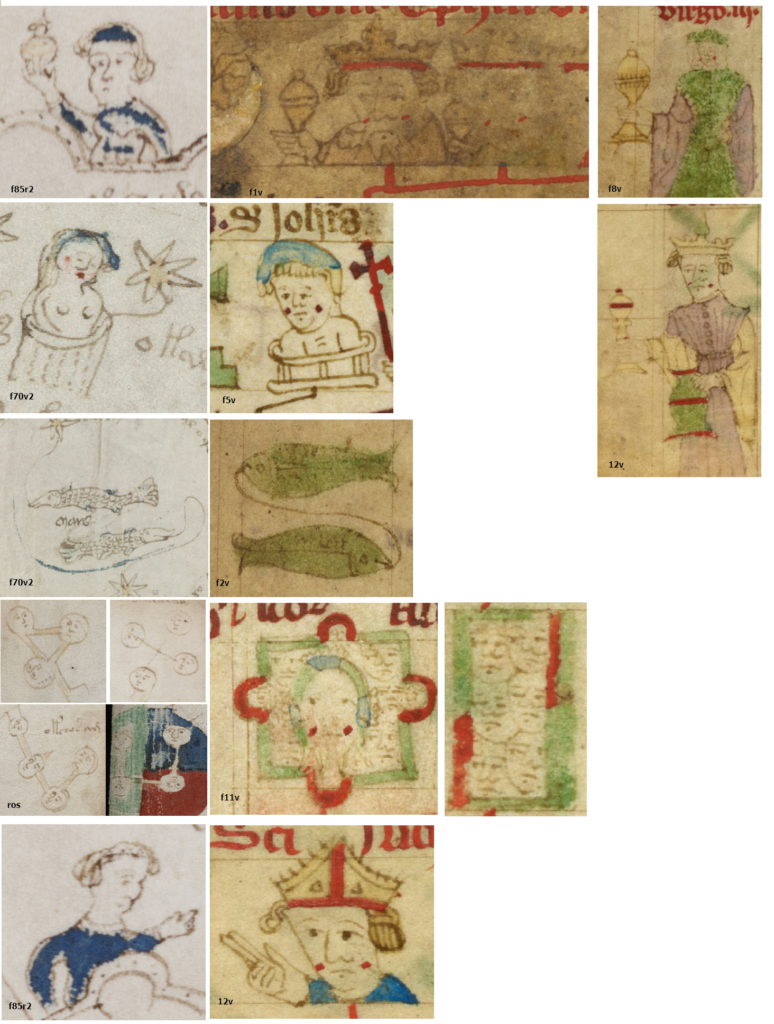 God holds in his left hand the earth and in his right a wedding band, his bond with the Church. From here, the Chain descends through all being.

The great chain of being is a strict, religious hierarchical structure of all matter and life, believed to have been decreed by God. The chain starts from God and progresses downward to angels, demons (fallen/renegade angels), stars, moon, kings, princes, nobles, commoners, wild animals, domesticated animals, trees, other plants, precious stones, precious metals, and other minerals.

The great chain of being (Latin: scala naturae, “ladder of being”) is a concept derived from Plato, Aristotle (in his Historia animalium), Plotinus, and Proclus. Further developed during the Middle Ages, it reached full expression in early modern Neoplatonism. wikipedia

Even before Christianity, the Pagans used the globe as a symbol of authority. Holding it in one’s hands or having it under the foot was a clear visual message of established power or supremacy over the world.

The Romans appear to have been quite familiar with this symbol as suggested by a 2nd century coin belonging to Emperor Hadrian’s reign that carried the Roman God, Salus shown with a foot placed on a globus, or a 4th century coin from Emperor Constantine I’s reign that depicts him with a globus in hand.

The Golden Bull depicted around 1400 the regalia for the Roman Emperor: 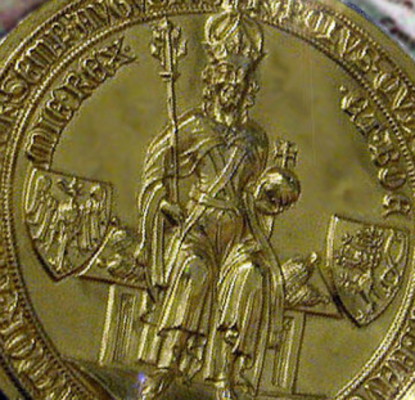 The globus cruciger (Latin, “cross-bearing orb”) is an orb (lat. globus) topped (lat. gerere = to wear) with a cross (lat. crux), a Christian symbol of authority.
Used throughout the Middle Ages and even today on coins, iconography and royal regalia. It symbolises Christ’s (the cross) dominion over the world (the orb), literally held in the dominion of an earthly ruler (or sometimes celestial being such as an angel). When held by Christ himself, the subject is known in the iconography of Western art as Salvator Mundi (“Saviour of the World”). It is associated with the sceptre.


Countries and religion where a  globus cruciger is held:
Netherlands: during period:
Denmark:
Norway:
Italy:
UK, Scotland:The Honours of Scotland, also known as the Scottish regalia and the Scottish Crown Jewels, dating from the fifteenth and sixteenth centuries, are the oldest set of crown jewels in the British Isles. Year ca. from 1540 +

Blog about the three crowns in the VMS:  http://www.ciphermysteries.com/2015/06/29/the-voynich-manuscripts-three-crowns 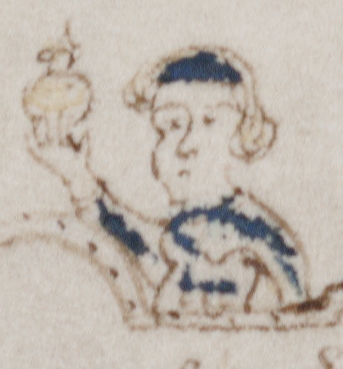 Also compare the goat with this detail 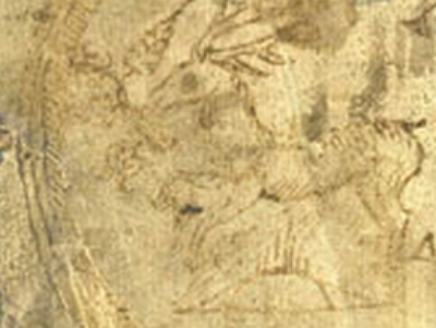 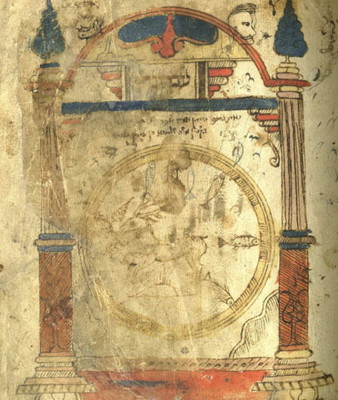 Richly illustrated manuscript of the Sefer Evronot (Book of Intercalations) used to intercalate the Jewish lunisolar calendar and to reconcile it with the Christian calendar for religious and mercantile purposes. Every Evronot manuscript, intended for local use by community leaders, merchants, and travelers, is unique. One of only about six illustrated copies dating before 1600, this copy is important also because it was made for use in Eastern Europe, whereas the majority are from Southern Germany.

Or does it show a ritual of a the Jewish feast,  water libation during sukkot ?

the Nisuch ha-Mayim (lit. “Pouring of the water”) or Water Libation Ceremony. 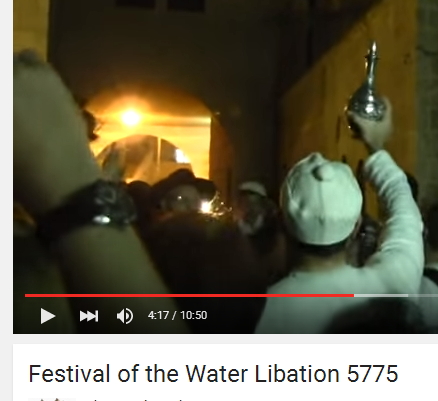 There is an answer on this symbolic drawing. More on it later.

Stumbled upon “Vesica Piscis”  on pinterest it showed this picture: 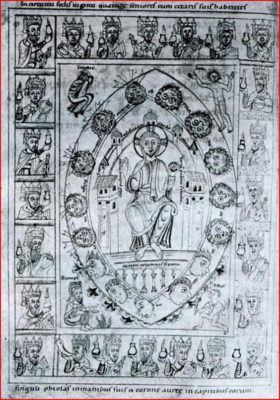 The source ms of the image is unknown to me (or google) but it’s probable that the Catholic Eucharist is shown: Jesus commanded his followers to “do this in memory of me” while referring to the bread as “my body” and the wine as “my blood”. Perhaps the Latin text in the image can give us more information.  [eucharisteo, Greec “thank”you”]

with gold, with a crown on their heads in their hands, thuis each Phileas 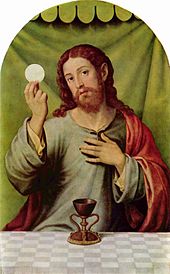 It has resemblance to showing the “body of Christ” 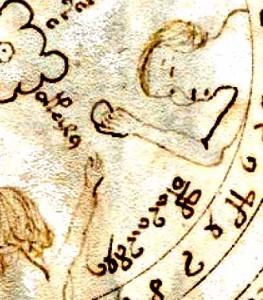 See for a clearer explanation on this ball in hand, also the Greec II and 57v page on this site.

And then there is the cramp-ring.

This ring would protect the bearer of the ring against cramp,  “falling-sickness” or epilepsy. The legend seems to go back to Edward the Confessor. See wiki

These gold and silver rings were so popular in a later period, that rings touched by Mary Tudor (before 1558) were thus “blessed” by the royal touch. See here