The Orto Botanico di Padova is a botanical garden in Padua, in the northeastern part of Italy. Founded in 1545 by the Venetian Republic. Known as the world’s oldest botanical garden that is still in its original location. – wiki  –

is a Latin term, meaning literally “enclosed garden”. At their root, both of the words in hortus conclusus refer linguistically to enclosure.

Hortus conclusus is both an emblematic attribute and a title of the Virgin Mary in Medieval and Renaissance poetry and art, suddenly appearing in paintings and manuscript illuminations about 1330 as well as a genre of actual garden that was enclosed both symbolically and as a practical concern, a major theme in the history of gardening.

During that time, plant medicines are expensive and plants had to be guarded.
Such gardens were often located in the neighborhood of a valetudinarium. (hospital)

A walled garden sister, my bride, a garden, a sealed fountain

one of the “scrolls” (megillot) of the Writings (Ketuvim), the last section of the Tanakh or Hebrew Bible. It is also the fifth book of Wisdom in the Old Testament of the Christian Bible.

Scripturally, the Song of Songs is unique in its celebration of sexual love. It gives “the voices of two lovers, praising each other, yearning for each other, proffering invitations to enjoy”. The two each desire the other and rejoice in their sexual intimacy.

Jewish tradition reads it as an allegory of the relationship between God and Israel. Christian tradition, in addition to appreciating the literal meaning of a romantic song between man and woman, has read the poem as an allegory of Christ and his “bride”, the Christian Church.

wiki on Porro: Girolamo Porro (c. 1520 – after 1604) was an Italian engraver on wood and on copper. He was born at Padua and spent most of his working career in Venice.

The garden was also considered the garden of the spirits and represented a metaphor of human existence in which the wall was the limit between the outside and the interior, separating and protecting at the same time.

In addition, the structure of the garden alludes to the four elements:

Orto dei semplici does not mean that the plants are simple, but it does mean that the cultivated plants were used for common medicines, often derived from one plant but also a compound.  “Medicamentum” or “medicina simplex” was used to define medicinale plants.

So the “Hortus simplicium” is a garden full of such plants, also called “Hortus medicus”.

Look at the detail in the center of the design: 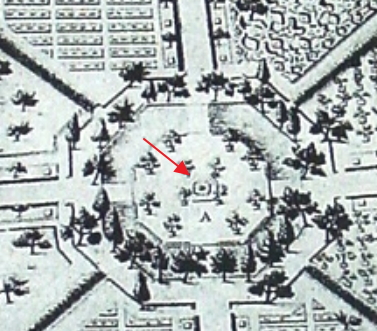 For different other gardens in that period, see here. Pisa, Firenze, Bologna.

Against the end of the 6th century, Vescovo di Siviglia, Isidoro, started such “Orto botanico” gardens. But according to some it was Nicolò V.

But according to others, Leone X and Leonarda da Vinci are the founders of these gardens.  Because the interest of Leone X (or Leo X, born as born Giovanni di Lorenzo de’ Medici) was established in Rome and in 1513 the following year, he was elected as pope.

At Casamari we find today again behind the Basilica, an “orto dei semplici”  the location of the small garden is incorporated in the ancient viridarium (a plantation of trees, pleasure-garden).

After the drying in a well-ventilated environment, the so-called armarium pigmentariorum, which is a massive wooden cabinet, the plants would remain in the most complete darkness. In addition to drying the monks preparation with the herbs syrups, dyes, macerazioni, etc.

Until 1970, in the gardens and enclosure of the cloister of the Casamari abbey, monks cultivated plants and herbs and medicinal herbs, while some plants still grow spontaneously, almost as evidence of ancient cultivation.  website

Which is no coincidence, le ninfe delle acque, the water nymphs are related in Greek and Latin mythology. See the Naiad article.

Monk Francesco Colonna is the presumed author of the Hypnerotomachia Poliphili.  from an acrostic formed from the elaborate first letter of each chapter, the work has been attributed to Colonna, a Dominican priest and monk who lived in Venice and preached at St. Mark’s Cathedral (1499) 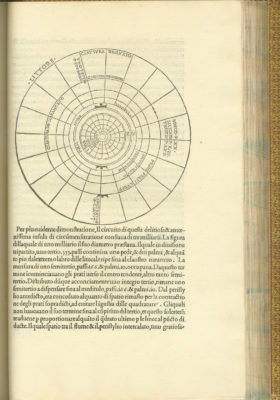 source
This image is from Chapter 21: Polia and Poliphilo arrive on the Island.

… from a maze of dark tunnels into a pleasant country of fruitful fields that he meets five nymphs who bathe him and take him to their Queen.  In this locus amoenus there is a sense of perfection and exquisite artifice in everything, including two remarkable gardens – one made of glass, the other of silk.

The island of Cytherea. There he finds a shore ‘washed by friendly tides and pebbled with strewn gemstones that shone in various forms and colours. There was also abundant evidence of the fragrant coitus of monstrous whales, brought up by the fruitful tides.’ This is ‘no place for mountains or deserts; all unevenness had been eliminated’.

It is a perfect circle, three miles round, with an outer ring containing twenty groves of trees and inner rings featuring a succession of meadows, knot gardens, emblem gardens and finally an arena containing the fountain of Venus. The book’s ekphrastic descriptions and line drawings of topiary, statuary and buildings had a wide influnce on the design and planting of formal gardens in subsequent years, from the canals and colonnades of Versailles to the Villa d’Este’s fountain of the sleeping nymph. –source–

The Hypnerotomachia Poliphili  or The Dream of Poliphilus, is a romance said to be by Francesco Colonna. It is a famous example of an Incunable (a work of early printing). The work was first published in 1499 in Venice. This first edition has an elegant page layout, with refined woodcut illustrations in an Early Renaissance style. Hypnerotomachia Poliphili presents a mysterious arcane allegory in which the main protagonist, Poliphilo pursues his love, Polia, through a dreamlike landscape. In the last, he is reconciled with her by the “Fountain of Venus”.  -wiki-.

“POLIAM FRATER FRANCISCVS COLVMNA PERAMAVIT” as acrostic would mean that “Brother Francesco Colonna has dearly loved Polia” is the writer and not Leon Battista Alberti.

The text of the book is written in a bizarre Latinate Italian. Without explanation, the text is full of words based on Latin and Greek roots.  The book, however, also includes words from the Italian language and illustrations which include Arabic and Hebrew words.

Moreover, Colonna would invent new forms of language when those available to him were inaccurate. The book also contains some uses of Egyptian hieroglyphs, but they are not authentic. Most of them have been drawn from a medieval text of dubious origin called Hieroglyphica.  -wiki-

The book went on to become a spectacular success. Indeed, it turned into something of a cult book in sixteenth-century Italy and was re-edited by Aldus’s sons in 1545. But it is in France that the book had its greatest success. There its publication probably shaped to a great extent the sensibility of the arts of the French Renaissance under the reign of Francis 1. Le Songe de Poliphile was published at the press of Jacques Kerver in Paris in 1546; it was reprinted twice in folio editions, in 1554 and 1561, and in quarto in 1600. The translation is usually attributed to Jean Martin and the engravings, also anonymous, to Jean Cousin.

The English version of 1592 was published under the title The Strife of Love in a Dreame at the press of Simon Waterson in London, dedicated to Sir Philip Sydney, and probably translated by Sir Robert Dallington. While the text is a fine example of the exquisitely crafted and charming prose of the Elizabethan period, it represents only about a third of the original and contains many errors of translation, beginning with the first sentence. The illustrations, also subject to many eliminations, are by a mediocre hand.  -source-

The first botanical garden designer was Matteo Silvatico (1285-1342), he was in the Scuola Medica Salernitana   (school of Salerno) a Latin medical writer and botanist. He is known for a 650-page encyclopedia about medicating agents (a pharmacopoeia) which he completed about year 1317 under the Latin title Pandectarum Medicinae or Pandectae Medicinae.  -wiki-

The work was completed in 1317 and dedicated to king of Napels Roberto d’Angiò.

Le Pandette, in the Venetian edition of 1523, consists of 721 chapters: of these 487 treats vegetables, 157 of minerals, 77 of animals and 3 are simple, of which we have not been able to give a definition. The 487 plants are named with 1972 names (between Latin, Arabic and Greek), with an average of 4 synonyms per plant.

Finally, it is interesting to note the great attention given by the Author to the hypogea of the plant (roots, rhizomes, bulbs, tubers, etc.). In descriptions they are always cited and their form often affects the very name of the plant.

A late-15th-century edition of Simon of Genoa’s Synonyma Medicinae is online at Google Books (in Latin). A 19th-century publication of a 15th-century Latin medical botany dictionary called the Alphita contains, in its 19th-century footnotes, many cross-references to Mattheus Silvaticus and Simon Januensis. It is downloadable at Alphita.

Through the twelfth century, Salernitan masters showed a growing interest in theoretical foundations. They speculated about natural philosophy in numerous Questions, drew on Aristotle’s views of nature (physis) which contributed to the labeling of medicine as physica or physick, (hence “physician”) saw the need of a better knowledge of anatomy, and pursued dialectical inquiry in their commentaries on authoritative treatises. Principles and procedure were interwoven in encyclopedic manuals of which the Breviary on the Signs, Causes, and Cures of Diseases by Joannes de Sancto Paulo is a model.  source

is a name referring to a group of three texts on women’s medicine, the Trotula, that were composed in the southern Italian port town of Salerno in the 12th century. The name derives from a historic female figure, Trota of Salerno, a physician and medical writer who was associated with one of the three texts. However, “Trotula” came to be understood as a real person in the Middle Ages and because the so-called Trotula texts circulated widely throughout medieval Europe, from Spain to Poland, and Sicily to Ireland, “Trotula” has historic importance in “her” own right.  -wiki-

Castore Durante
is interesting because of the “Versi mnemonici e xilografie pirata”.

Giambattista Della Porta uses these words also in “: Phytognomonica” see here.
“prodest & conuulsis”.  Not sure what it means. “Benefit and slanted”.