This folio f57v could contain valuable clues regarding to the script, cause it resembles an alphabet wheel. 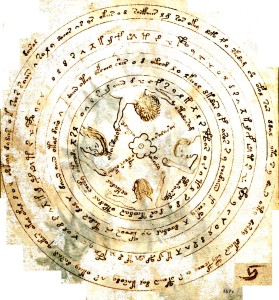 Description of this folio:
“Four labels radiating from centre and four labels near persons.  Four bands with circular text. Outside outermost is a ‘start’-marking label. All bands have single characters and single words. Second ring from outside has four times repeating sequence of 17 single chars”

At the center is a simple rosette, with 4 short and 4 long rounded  lobes, with a circle and a dot in the middle.
Inside the inner circle there are four naked human figures,  visible from the chest up, heads towards the center. Two are male, two female; two are seen mostly from the front  two mostly from the back; two have both arms raised, two have only one. Here are the combinations:

# There are 8 words inside the inner circle. Four of them radiate
# from the rosette, roughly along the diagonal lines. The other
# four are tangential (but with straight baselines), to be read
# in the clockwise direction; it is not clear whether they
# label the four figures, or the spaces between them.

In the middle of the page we see this:

Probably it is a symbol.  That symbol could be the sun. Which also represents: a day. Found and used in runes, hieroglyphs and astrological symbol. Is it also somewhere else in the script ?

Our current numbering system is called Arabic numerals and although there are not arabic characters as we might know them, this name originates from  the time that the Roman numeral system was replaced. read more: search for keyword:  numerals wiki

It could also have been a marking which represents the number ij with a stroke on top.

It is possibly a written digit 5

if it is 17 that is really very coincident that the text in circle two has a repetition of 17 characters as well. But i doubt it is a 17, it really looks more like a normal 5.

Additionally have a look at folio 155v on the MS Harley
http://www.bl.uk/manuscripts/FullDisplay.aspx?ref=Harley_MS_585

Look at the 5 in the margin. Please also notice how the 6 is written 😉

Confused? If you want to know more: then look at this page and picture.

The number 17 in Latin  is written as XVII. Which is an anagram for vixi which means: i lived.
No wonder that the number 17 in ancient Roma has the meaning of ‘bad luck’.

In Swedisch the number 17 is written as : Sjutton också.  In ancient religious times it meant something like ‘Oh darn!, Shoot!’

People celebrate St Patrick’s Day is the on 17th March each year, the day St Patrick died (supposedly). In Ireland it’s a public holiday and most businesses close. There are colorful parades in most towns throughout the country and this tradition is copied in cities all over the world where there is a sizeable Irish population.

Traditionally men and women wore a bunch of shamrock in their lapel on St Patrick’s Day. That is less common nowadays among younger people, probably because the shamrock shrivels after a few hours!

From outside to inside there are 4 rings.
The outer ring is considerd as ring 1.

The second ring has a repetitive set of 17 characters:
oldrvxkmf©trª«yc¬

The repetition consists of these charactergroups: 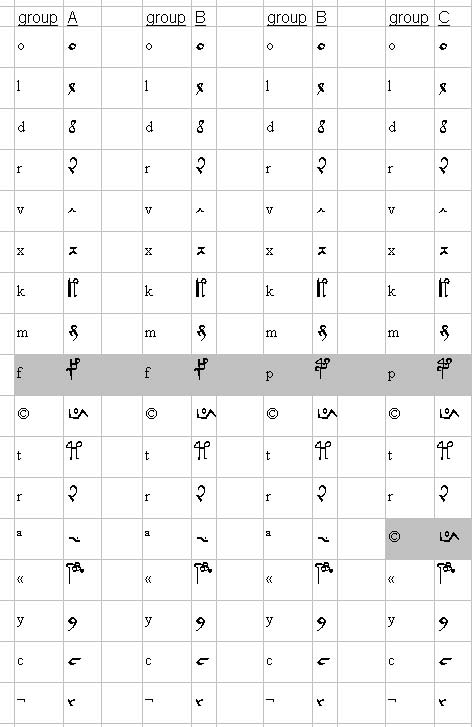 As one can notice there are only 3 little ‘mistakes’.
Or if we would take the middle row (EVA F and EVA P) we can also say that if we consider EVA F=P, there is only 1 character out of the sequence.
Are those characters hinting to us?

Unfortunately the left one has 3 strokes and the right one 4 strokes. Otherwise i could try to find an ligature of an masonic decipherment (go back to at least the 18th century). But there is no real reason now.

The letter analysis of the repeating letters checked against the letters and symbols in the entire VMS:

Of course the strange symbols are somewhere in the CurrierAB  linear transcription text, but in my freq. analysis they are not. There, lines with less than 3 characters have been deleted. And also characters with low ascii-value or extended ascii-value have been removed. Those are the ones in the column ‘letters from 57v not placed’. Those are approximately 252 special symbols together  (see * in the column).

Here is the inner circle text:

I also made an EVA translation of the page f57v, it can be viewed here: f57v_in_EVA as PDF file.

Furthermore, i’ve laid the twirl page f68r  on top of this f57v page to see if there is a pattern…there is none.

A strange coiincidence while researching Aratus. Which has many references and similarities with the Voynich manuscipt.   The Epimenides story led me to wikipedia with  the following text:

Epimenides of Knossos, Crete was a semi-mythical 7th or 6th century BC Greek seer and philosopher-poet. While tending his father’s sheep, he is said to have fallen asleep for fifty-seven years in a Cretan cave sacred to Zeus, after which he reportedly awoke with the gift of prophecy (Diogenes Laërtius i. 109–115).

I could not find any original number 57 on the Voynich manuscript page, but wanted to leave this message anyway.

Nick made us think about the position of the placement of symbols in 57v again.

And together with my observation I’ve made some diagrams just as exercise: 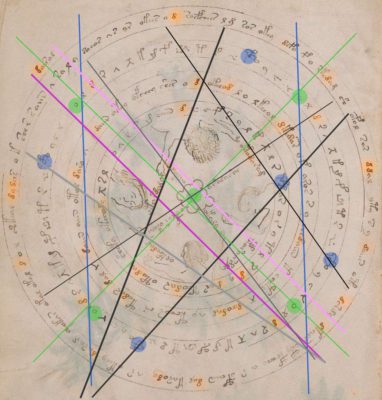 These markings have been made:

If we would remove the background it looks like this: 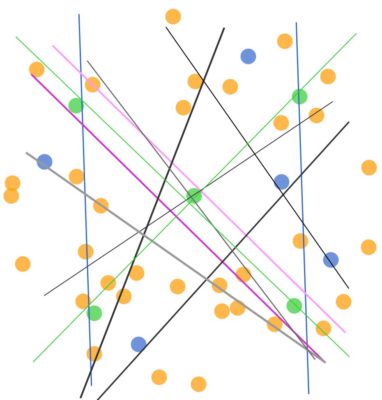 * Green lines: these lines rund through the green o’s from the second circles and through the center. the two green lines have a 90 degree angle towards each other

* Purple line: run through the assumed starting point (4 striped in the 4 circles), and from dairol towards the other end. It runs paralell to the line from o-o-second circle.
This line also divides the 4-th circle into two parts: one part is made up of single characters , the other part contains words.

* light purple line: this is made opposite to the purple line and at the end of the ‘marker word’ [dairol]

* black & grey lines: the black lines are drawn as alignment for the words in the center.

Notice:
– how the line through ‘aralarar’ (more or less) touches the x on the 2nd circle and also the [x] on the 4th circle.
– how the bottom black line runs through two flourished letters, and starts and ends with an [o] in the outer circle
– how the black and grey lines converge somewhere

If we assume that the word ‘dairol’ indicates ‘rotate’ (dai=null or ‘do’ rol=ro[tate])  Do we need to rotate the outer circle?

Version2
The exact location of the black lines was improved.
Some red dots are now placed on the points where the black lines cross.
We now have most dots inside the inner circle. One on the inner circle band, perhaps that should have been on the letter [o] there? Should we have placed the other dots inside the open hands?
And one red dot is on the outer (first) band.
Then we placed a square around the flourished letters.

Then the green lines that run through the o’s were changed. Their color changed into red and the y are moved according to the required points where they could meet the hands that have no dot:

There are 6 hands. Yellow dots are placed on the hands: 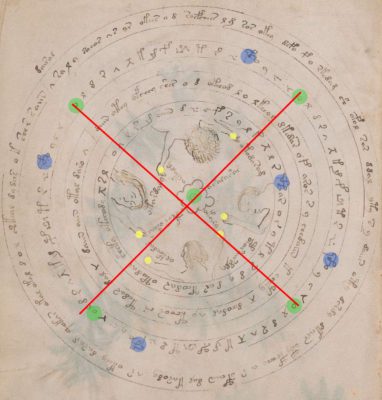 Trying to find the lines through the arms, what is the initial start- or end-point?

Green lines drawn through the arms. 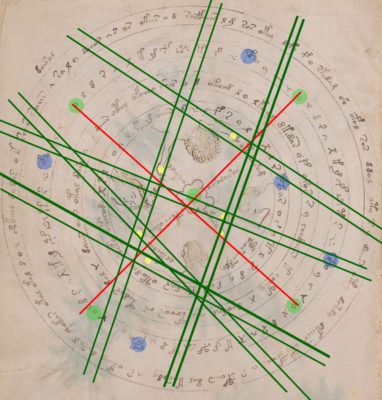 Oh, those are much lines, let’s focus on only the two single arms: 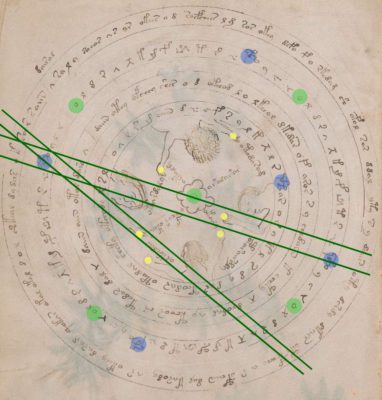 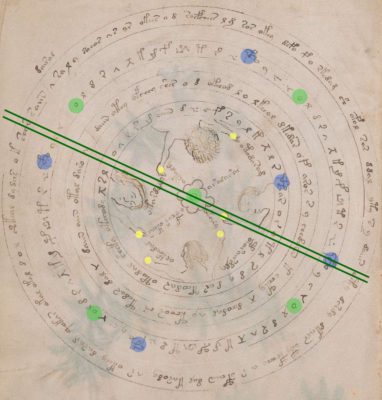 Trying to improve on the exacter lines on both now: 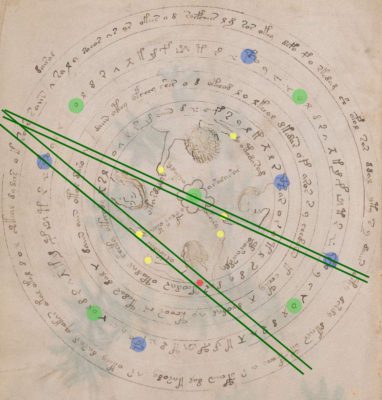 That’s that. Now where are the other arms going?

Made a rectangle with red glaze to find out if there is symmetry. 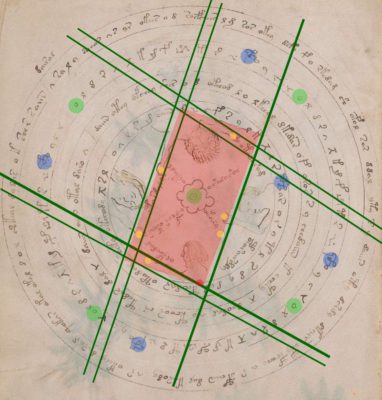 This top horizontal line is now aligned exactly to the “dairol” “beginning”. 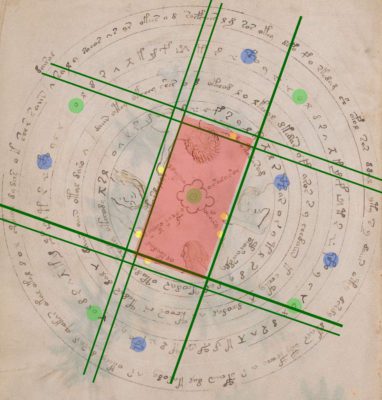 Making the lines a bit cleaner: 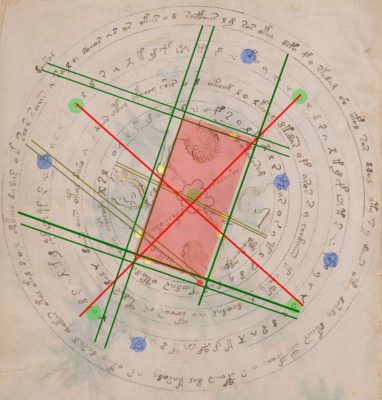 The repeating band now removed, but it does not really make sense: if you turn that or any other band, nothing is made more visible or notable. 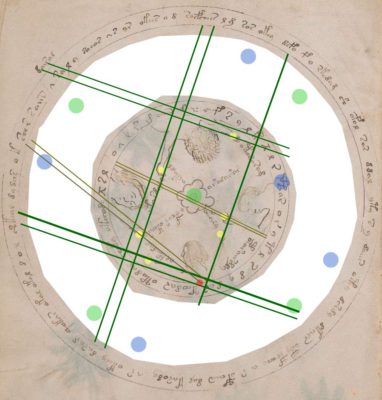