By reading about Kircher and google, i found a website with this picture 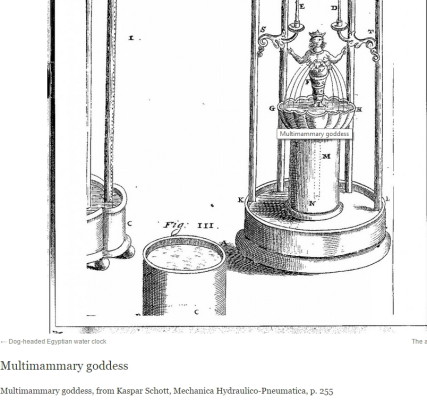 multimammary goddess with many breasts by Casparis Scotti (1608-?) Not by Kircher!
Mechanica Hydraulico-Pneumatica, p. 255

source http://web.stanford.edu/group/kircher/cgi-bin/site/?attachment_id=639
This Mr. Scotti lived around the same time as Kircher.

Now i was curious, are those breast also stacked in the VMS? 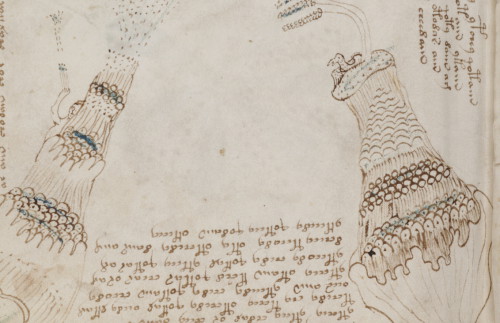 …and also the rosette pages.

The statue is a copy of the cult image which stood in the temple of Ephesus, dedicated to Artemis, and represents the goddess as many-breasted (multimamma), suggesting her generative and fertilizing power, but perhaps this iconography follows an Archaic Anatolian pattern and had nothing to do with female breasts (Graf 2005c). The intimate relationship of the goddess with the animal world – which is emphasized in Asia Minor since the Neolithic times in the representations of the Mother Goddess – manifests itself in the several images of animals that are scattered on the body of the statue. It is probable, indeed, that the Artemis of Ephesus was originally a different goddess from the one worshiped in Greece, an Asiatic goddess, associated with fecundity and the earth, heir of the female deities of Prehistory. The Greeks, when they came to the shores of Asia Minor, identified this ancient goddess with Artemis, and built, in her honor, the great temple of the Artemision in the city of Ephesus, which was still very important for the local people at the times of Paul’s visit in this place (Acts, XIX, 23-48).

A discussion whether or not these are breasts or something else, read here. 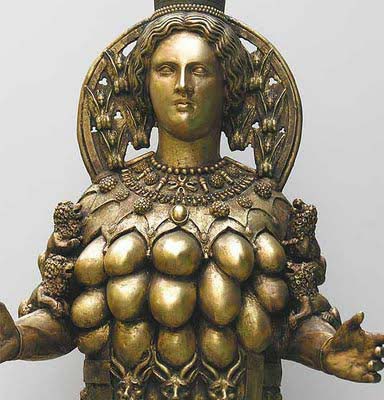 The breasts represent bulls’scrota, this can be seen clearly because the nipples are missing when looking at Artemis of Ephesus.  source book

Van den Vliete’s figure is based on the second-century Farnese Diana now in the Museo Nazionale, Naples. Source

It is an image of the goddess as the multi-mammary Ephesian Artemis, a conflation of Classical and near Eastern themes (the cult of Artemis originated in Asia Minor); her overflowing breasts symbols of Nature’s fertility. Although the fountain design in the Lumley Inventory shows Diana without the many breasts, her lower body is covered in a sheath-like skirt ornamented with the heads of animals (including lions), in a clear reminiscence of the many images of the Goddess of Nature as Artemis/ Diana produced during the period.

The great primal Mother Goddesses, the creatrixes of nearly every culture, were invariably called Ma. ( source)