Reading parts of the book of David. A.King, with examples of the encryption methods from the 13-th century, (The Ciphers of the Monks:~ A forgotten number notation of the Middle Ages), it led to the idea that the VMS letters could probably be such a cipher.

The VMS letters are transcribed to symbols, called elements. After doing so we got 8 elements. 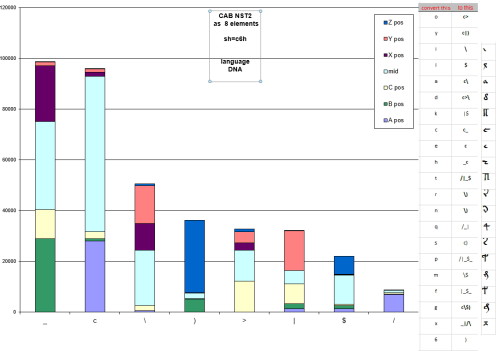 This dna tells in a simplified way, that every word written is started by an element ‘c’ and sometimes by element ‘/’.

Then that is always followed by writing a straight line ‘_’ and sometimes ‘)’.
And so on. The “normal” full text Dna, does show exaclty which letters that are.

Of course it all depends on the primal definition of the letters into elements, but if done consistent, this provides the image that shows there is  NO Cistercian or similar cipher used.