The two symbols on the left and the one in the upper right corner are interesting, also because they are on the first (known) page.  Here they are enhanced and displayed: 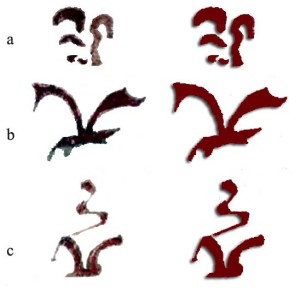 a. symbol for herbs, a magic wand or a crosier (crozier, pastoral staff, paterissa, pósokh).

The crosier stylized staff of office (pastoral staff) carried by high-ranking Catholic, Eastern Orthodox, Anglican, and some Lutheranand Pentecostal prelates. United Methodist Bishops carry croziers in formal functions. The other typical insignia of most of these prelates, but not all, are the mitre, pectoral cross, and the episcopal ring. Before that they bore the symbol of the shephard’s crook from the Egyptian kings.

The crook (heka) and flail (nekhakha) are symbols used in Ancient Egyptian society.
With some imagination, it could be the crook and the nekhakha in one image.

as symbol of ruling insignia. See also the article on the Hyksos. Later the shepherd’s crook was adopted as a religious ruling insignia by the Christian clergy.

Also, and this is a far stretch perhaps, with some phantasy you can see a icon of a rooster from the side.  This idea came from seeing the logo from mr. Strickland.
b. seagull or other bird like phoenix ? Odin in Eagle shape ?
c. a cooking pot with something hot in it or the Vesta Symbol

Vesta /vestia is the virgin goddess of the hearth, home, and family in Roman religion.  Vesta’s presence is symbolized by the sacred fire that burned at her hearth and temples.

In astronimical use, the symbol is based on ‘an altar with fire on it‘.
reference: von Zach, Franz Xaver (1807). Monatliche correspondenz zur beförderung der erd- und himmels-kunde, Volume 15. p. 507. source here.

Stumbled upon a (too old) coin with the same picto. 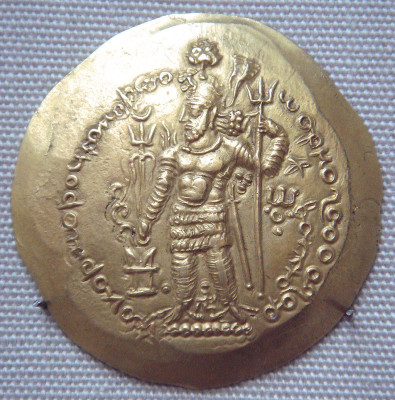 Coin is from South Asia. Khusan Empire.  A Sassanid coin, Hormizd I
The Sassanid Empire, also known as the Sassanian Empire, was the last Pre-Islamic empire of Persia, under the rule of the Sassanian Dynasty from 224 to 651.

Found a description to ‘spirit of urine’or spirit of wine:

comes from this document:

The “Bird Glyph” has been seen also in other manuscripts’ left margins.
Interesting page comes from a blog  here Where he writes about the Codex Taurinensis, used as ‘a paragraph header’, Codex Aubin, Codex Cardona. (please read over the Atlantis lines)

Some commentaries are also worthwhile:

“Several of the Aztec manuscripts contain the “Bird Glyph”. It’s use seems to always be the same — as a marker/bullet at the beginning of one of the Spanish glosses added to the text to describe what’s going on in the native section. Other native codices use the more common “CC” in its place. From what I see in the facsimiles/photos that I own — it seems that only one or the other was used in a single manuscript — never both.
Possibly two different schools of Jesuits/Spanish scribes responsible for writing the commentaries?”

“I have copies of both a facsimile and a translation by Roys. While looking for online images from it, I happened on a complete copy at:

Folios 42v through 44r are loaded with examples of the “Bird Glyph”. Other sections have instead a “bullet” that looks like a cursive capitol “J” — perhaps merely a varient of the usual “CC” symbol.  The manuscript was compiled in 1782″

Also a reference is made to

or, are they Chinese characters?

The only thing i am sure of, is that the swirl depicts fire
That symbolic little drawing is quite common, even today.

Have a look at my recent discovery here:

“Mesoamerica stands out in the Western Hemisphere for having an unusually vast and rich body of pictorial manuscripts (known in Spanish as mapas, lienzos, códices,pinturas, etc.) made by indigenous painter-scribes”: read more

This manuscript shows the different payments made by the tribes and starts with: esta es la pintura de los tributos …..

Almost every piece of text starts with this symbol, i guess it signal something like a bullet or a star that a new paragraph will start there.

or is it the letter D, as here shown in a ms from Basel

Many sources tell me that “It has always been assumed that John Dee has something to do with the Voynich manuscript”.

During the years I did not find any proof, research findings, or fundamental references of such. This week I decided to investigated some works and i came to the conclusion that the presented red letter in the Voynich, might be the letter R.

Following pictures are all from the handwritten transcription of John Dee (1527-1608) of  Steganographiae:

google: A transcript of inestimable and wonderful work Steganographiae of John Trithemius, Abbot of Sponheim year of 900, written now finally d & dark powder, which has been buried in the ground, dug diligence and zeal of James Casteluitrei. London 991.

Beneath the title Dee added ‘A tenebris & pulueribus in quibus sepultum hactenus iacuit diligentia et studio Jacobi Casteluitrei Londini MDXCI’. The date ‘1591’ suggests
that this is not the copy about which Dee wrote to Cecil in 1563 (R&W
p. 6) but a later copy from a text supplied by Castelvetro, for whose  John Dee’s Library Catalogue 20 activities at this time see RJR, ‘New light on the career of Giacomo
Castelvetro’, Bodleian Library Record, 13 (1990), 365–9. The manuscript was formerly wrapped in a bifolium of a psalter of s. xiv. Other leaves were used to wrap MSS Peniarth 293i (Hengwrt 277) and 294 (Hengwrt 277), both of which were owned by John Jones of Gellilyfdy, and further leaves survive among Peniarth binding fragments of unidentified manuscripts. On fol. [i] is ‘Samuel Harris’, s. xvi/xvii. source:  PDF paper 2009 from Julian Roberts and Andrew G. Watson. 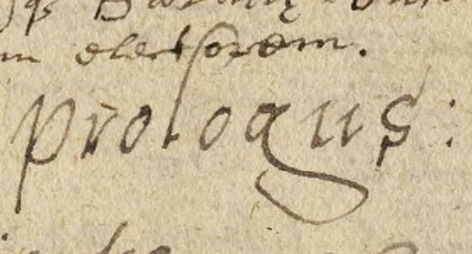 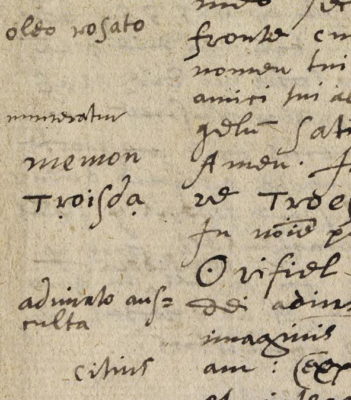 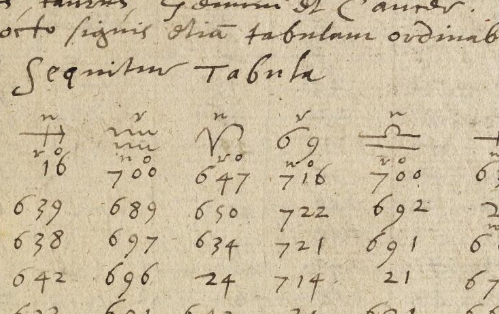 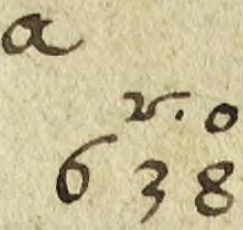 In heraldry images a similar image (left corner) can be found: 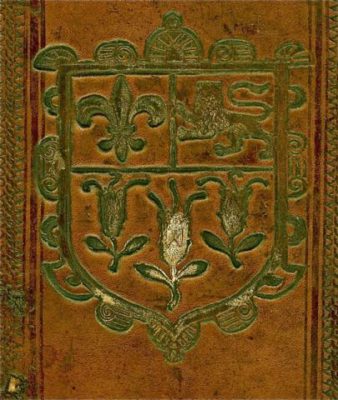 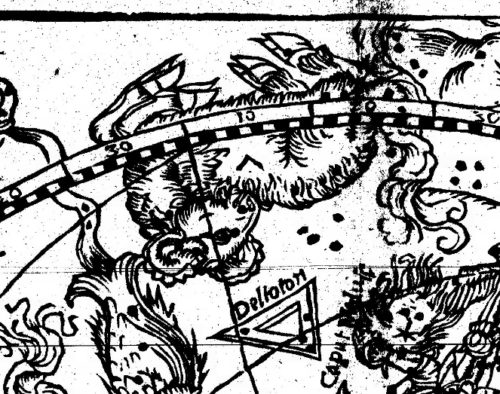 The symbols in this drawing are interesting zodiacal pictographs. 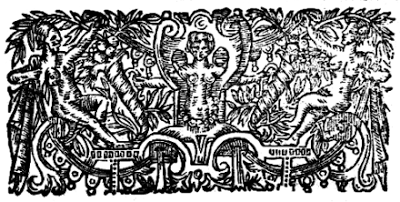 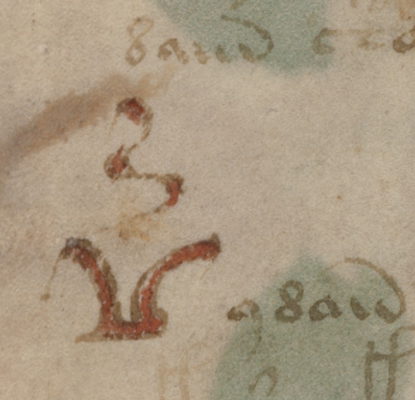 Picture is from the site: http://claviculatheurgia.blogspot.nl/2016/08/the-ars-notoria-is-designed-as.html?m=1.  Mentioned in relation to the Ars Notoria, mentioned from http://esotericarchives.com/notoria/notoria.htm

Which can be read here: https://en.wikisource.org/wiki/Three_Books_of_Occult_Philosophy/To_the_reader

The Ars Notoria is a rare ancient magical text that is said to perfect memory and master academia among other incredible things. You can download a copy, translated from Latin into English by Robert Turner, 1657. (Transcribed and converted to Acrobat by BenjaminRowe, July 1999 Foreword copyright 1999 by Benjamin Rowe)   http://www.ancient-code.com/wp-content/uploads/2016/04/Ars_notoria.pdf

The Sphere of Manilius, Marcus Manilius.

On the left “Natura Universalis” Pan, and on the right Mercury, Hermes as “Universitatis Interprenta”.

The symbols used on this plate printed 1675 resemble.
source:  http://www.whipplelib.hps.cam.ac.uk/special/overview/featured-items/sherburne 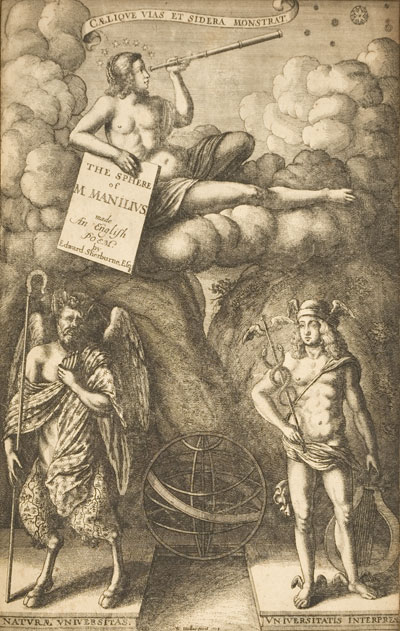 Of interest are also the plates of the sun and the moon. 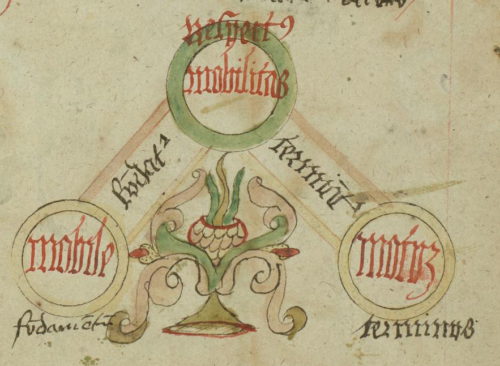 Illustrated introduction to natural philosophy, supposedly according to the principles of Isidore of Seville, but in fact representing later Aristotelian and Thomist thought and opposing the followers of Duns Scotus, including the 15th-century theologians Nicolas d’Orbelles (referred to in the manuscript as Dorbellus) and Etienne Brulefer (in the manuscript as Brulifer). Includes discussion of the proofs of existence of God; the use of the principle of deduction; the celestial spheres and compass points; and the elements, temperaments, and humors.

An idea
It occurred to me that it is also possible the right corner symbol shows us a distrorted symbol.
Such a thing would be possible if the right corner has been folded and created a copy image of the original red 2-like symbol. 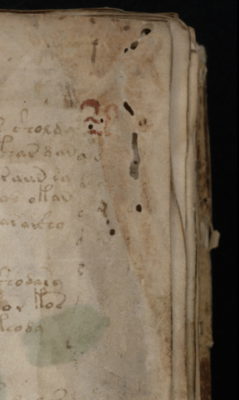 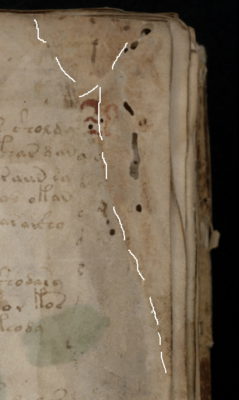 Here you see the left 2-like symbol flipped to the right. it does not really match and that could be caused by the slight curl and stretch of the fold? 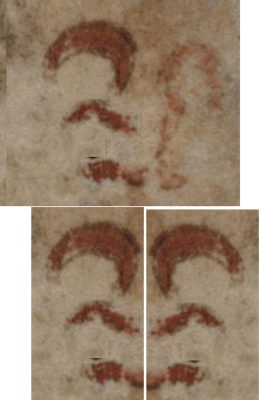