Based on some mythical works I reviewed my previous decomposition of the Voynich characters and tried some variations. Although there are some doubtful and some other possibilities currently this set of network has been chosen: 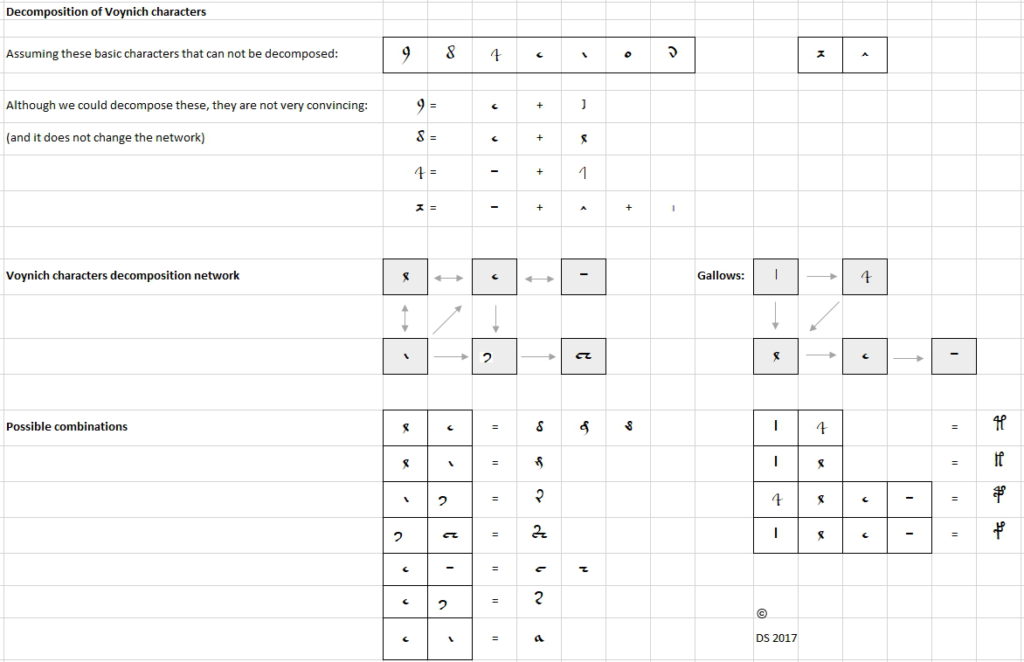 It is important to realize that if you are doing analytical experiments with the Voynich characters you need to find a way to place several decomposed items on the same position.

An example: Suppose you have the text:  [abc etc.]

If you replace [a] with a decomposition of characters [1] and [2] you would get: [12bc etc.] or [21bc etc.]. Visually it seems it does not matter, but if you are doing character connect analysis or an positional approach you now placed one character in front of the other, but for a good analysis you need to look at both variations:  [1] in front then [2] and the second variation:  [2] in front then [1] .

In the figure there are 6 basis forms for 10 derived characters, that is a meager because I hoped for more. And for the 4 gallows we need also 5 characters.

The count on the non-decomposed characters is about 10, depending on which characters you further decompose and which not.

Now it is perhaps a good idea to see if we can generate all the “anomalian” characters, such  as shown in the table here under the section “Later, Jim Reeds showed that many characters in the Voynich MS cannot be represented exactly”. Perhaps those characters are mistakes in the sense that the scribist did not correctly follow the arrows in the decomposition network?