This chapter is about the Romani Language, or language of the Roma, also called the Gypsies.

The VMS text specifics that provide a match at first sight are:

o in front of a word.

o itself as word is an article.

y in front of a word.

y itself as word is an article.

In Italian an initial capital letter (maiuscolo) is required:

In many other European languages the rules are similar.

There seems to be a general consensus that the writer of the manuscript is a well educated person for the time (we assume around the year 1400 +/-70). The physical “paper” that was used is vellum and was a rather expensive surface to write on. The letters used in the manuscript are written clean and proper and the cursive writing with curved “gallow characters” tends to show the author is a sophisticated figure.  There also has been theories that the author probably traveled much or was well-read because of the many different images that are in the book. There are many many different hair dresses on the woman, several hundred of herbal depictions and many more undetermined details. Especially a traveler could have seen all these things in reality.  A nun or monk could have seen that in a library only, in those days.

A traveler that wanders from land to land is an ambiguous name, it can also indicate:

The traveller is a well known term and the explanation on wikipedia is sometimes confusing.
Most groups are related to the Romani people.

The flag,  O styago le romengo in Romani, consists of a background of blue and green, representing the heavens and earth, respectively. The flag also contains a 16-spoke red chakra, or spoked wheel, in the centre, representing the itinerant tradition of the Romani people.

The spoked-wheel image above represents a sixteen-spoked chakra, adopted at the First World Romani Congress in London in 1971 as the international Romani symbol. The chakra is a link to the Roma’s Indian origins (the 24-spoked Ashok Chakra is in the center of the national flag of India, the Tiranga) and represents movement and the original Creation. The green and blue flag with a red chakra in the center was adopted as the Romani flag, as well as the motto “Opré Roma” (Roma Arise). The song “Gelem, gelem,” also known as “Djelem, djelem” and “Opré Roma,” was selected as the Romani anthem. April 8 was proclaimed International Romani Day.

The Romani people traveled from Central India, to Europe via Persia, Armenia, and arrived in Greece as part of the Byzantine empire, and/or Turkey somewhere between 1100-1400.

The Roma, Sinti, Calè and many other European population groups who are collectively referred to by the mostly pejorative term “gypsies” refer to their language as Romani, Romanes or romani čhib. Linguistic-genetically it is a New Indo-Aryan language and as such belongs to the Indo-Iranian branch of the Indo-European languages. As an Indo-Aryan diaspora language which occurs only outside the Indian subcontinent, Romani has been spoken in Europe since the Middle Ages and today forms an integral part of European  linguistic diversity. (cited from Romani-Project Graz / Dieter W. Halwachs).

However, the exact origin of the language is still uncertain; there is not much direct evidence.

How did Indian languages get constituted ? One can read quite often that Rromani developed directly from Sanskrit, a misleadingly inaccurate and simplified statement. As a matter of fact, the history of Indo-Aryan languages is classically divided in three period: old Indic, middle Indic and modern Indic, all of them being actualized first of all in a series of vernaculars. (source: Marcel Courthiade, A_Succint_History_of_the_Rromani_Language 2012)

Romani and their dialects

The language of the Romani has been spread throughout Europe and the varieties have been classified in dialects. 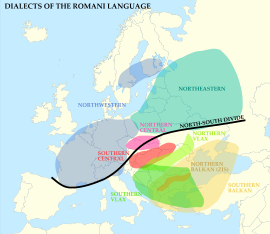 The main dialects are:

In Europe the main languages are classified as the Indo-European languages. Romani is an Indo-Aryan (from India) language and is the only Indo-Aryan spoken language in Europe.

SIL Ethnologue has the following classification:

There are only a historic few words, a few text written about the Romani language or by the Romani themselves. This is inherent to the fact that the language for a long time is considered to be an argot (secret language) and often used to protect themselves. Another of such language is Rotwelsh. 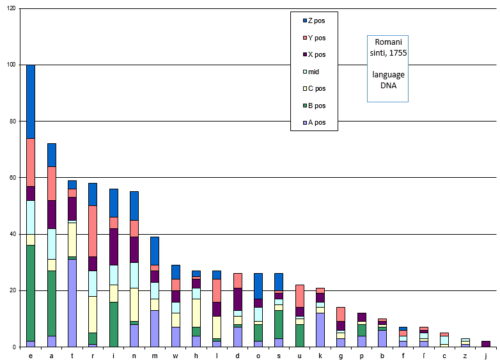 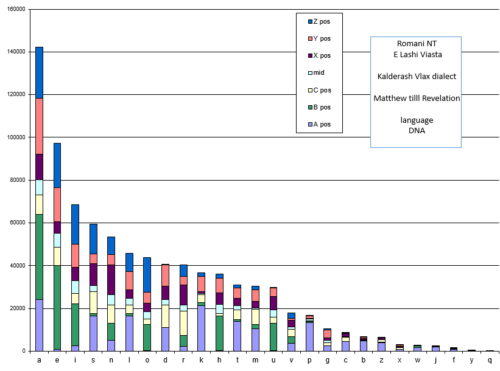 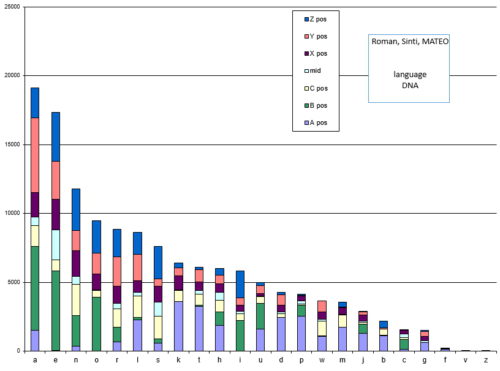 Some Romani groups do not call themselves Roma, such as the Romanichal, Gitanos, Kalé, Sinti, Manush, and others, but refer to other groups as Roma or Gypsies.

Marimé, the Roma pollution code, refers both to a state of pollution as well as to the sentence of expulsion imposed for violation of purity rules or any disruptive behavior. Marimé is a core element of Roma society and culture and it pervades every part of traditional Roma life. The majority of Roma adhere to the concept of marimé and its many different names, such as moxadó, melali, mageradó, mokadi, kulaló, limaló, prastló,palecidó, pekelimé, gonimé or bolimé.

Roma have been known to perform many kinds of predictions. They have read tea leaves, seen visions in crystal balls, analyzed the future from reading cards, and from interpreting the significance of numbers, or numerology.
They have practised palmistry, judging a person’s fate, character, and aptitudes from the shape of hands and fingers and the designs of lines in the hand. Though they claim that their great powers of prediction come from supernatural sources, the real skill of fortune tellers lies in their remarkable abilities in judging human character and in manipulating human desires.
She knows that most people remember what comes true and forget what does not. She knows, too, that she is capable of adding an exotic, exciting element to the life of the gadje. To please their believing clients, they most often predict a favorable future. There will often be mysterious warnings of perils that might well be avoided by preventatives provided, of course, by the Romni. As a rule, Roma never practice their skills as fortune tellers on other Roma.

Roma believe in their powers, as exemplified by their use of curses, called amria, and healing rituals. The fortune teller is always a woman called a drabardi. The concept of fortune telling contains several independent elements that are misleadingly grouped together. One element is foretelling the future, called drabaripé or drabarimos. Another element relates to healing powers, which the Roma do practice among themselves. The healing elements of fortune telling are called “advising.” Both elements are based on a belief in the supernatural.

Good luck charms, amulets, and talismans are common among Roma. They are carried to prevent misfortune or heal sickness. The female healer who prescribes these traditional cures or preventatives is called a drabarni or drabengi. Some Roma carry bread in their pockets as protection against bad luck, or bibaxt, and supernatural spirits or ghosts, called muló.

Any number of herbs, called drab, are used for the prevention or cure of various diseases. Herbalism may be practiced by both sexes. Some of these herbs, called sastarimaskodrabaró, actually have medicinal value in addition to their supernatural qualities.
source: http://www.reocities.com/Paris/5121/occupations.htm

Are the 4 most common word endings (y, l, r, n) in the Voynich, possibly formed by the present tense verbs endings?

After a superficial study of the general language endings it seems not to to behave in particular towards the VMS language.

It was very very difficult to get the language corpera. In fact, I’m still  very much interested in any pieces of Angloromani or Welsh corpus.