In Currier A, B and the entire VMS (i call it Currier AB, although it is more than Currier A and B together) and counted the words:

Singlets are defined as single words, those occur only once.

It is quite reassuring to see that the % of the word ‘daiin’ is not really off chart compared to a 25 chapters of Latin (Genesis 25 chapters).

I also took some other languages for comparisement of the word frequencies.

Well, that was for comparisement a nice exercise.

Counting and defining bigraphs and trigraphs (..and higher) are very nice, but it does not really tell us a great deal about the letter positions within the word. Nor does it tell anything about the  possible vowel-consonant-position-combinations-within a word. To get all that we need to make new analysis and commonly one would use vowel and consonant counts and positions as well. So now I want to try something new. Also because we still have a possible difference in how to handle the text ‘Currier A’  and ‘Currier B’.

Let’s call this the ABCmidXYZ method because it will show the positions of letters in the words and counts those positions within the word. A quick table with example will explain this, letters/words that have length=1 will be skipped:

If we process Currier A and B we will get a stacked graph that show us this: 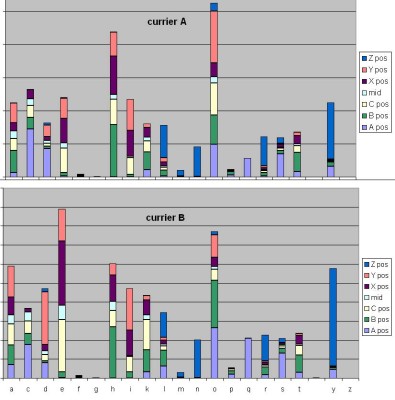 This shows that the position and usage of the the letters did NOT change between Currier A and B. Therefore it is the same language and is the same cipher.

Differences are there of course in frequencies (percentages) used, which can be caused by the choice of words, a changed grammar, a changed key etc. Some letters have different position preferences.

Looking from A to B the preferent positions shifts:

We can now read the position preferences rather clearly in the graph or in the generated table.
I harvested from several medieval documents about 1 Mb of text in Latin and I took all the unique words from that text. Then from that text I analyzed the letters with the ABCmidXYZ method and the result is displayed now: 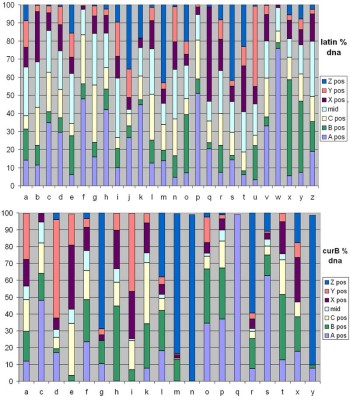 As you can see the title is renamed to ‘latin % dna’ because this represents the language Latin, where i took the percentage of each letter in stead of the text counts.

Please note that the % graph will change when you have a smaller piece of text of Latin, because some letter positions only show when you have enough occurences.

A bit more solid dna is a plain Latin Dna based on a file with 25.000 (unique) lettercounts: 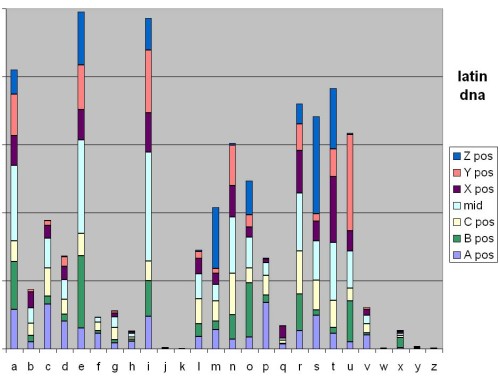 Compare the Latin DNA graph with the first Currier B graph.

The language DNA  shows the positions, the letters and the frequency of those and is useful for identification of languages.

The language % DNA shows the positional occupation within the language itself and is a lesser candidate for comparing  languages.

The best language DNA, meaning “the visible clearest DNA”, we get when we use unique words.
For identification of the languages published here I will use that method. Currier B will then look like this: 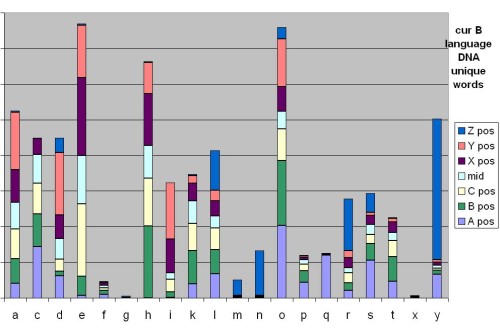 Of course if life was simple, I could compare Currier B and Latin and shift & substitute the letters from the CurrierB in order to get a good latin text.

Unfortunately we have some big problems:

b) is there a way to change the Currier B script so i can get the match with for example Latin?

Dna of other Languages

Possible languages are: Italian, a Scandinavian language, German (although we already saw at the letter f.a. this is hopeless), French, English (just for fun), Spanisch (thank you  Juan-José Marcos!), Macedonian, Dutch and perhaps Greec. 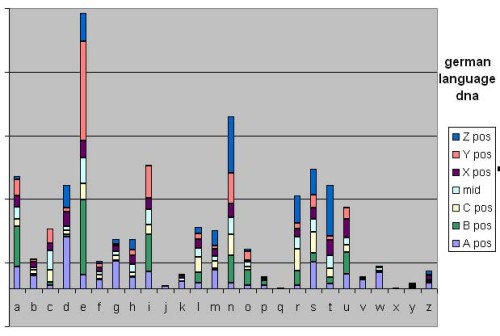 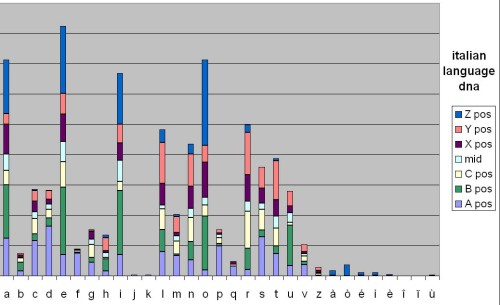 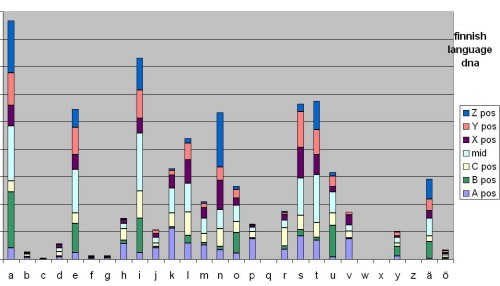 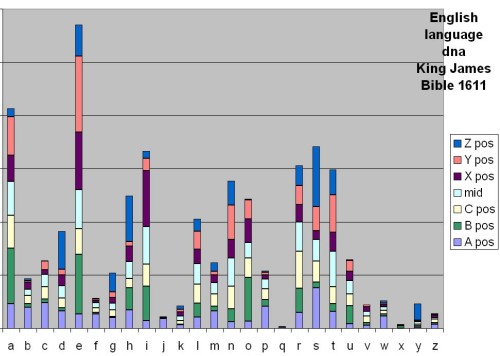 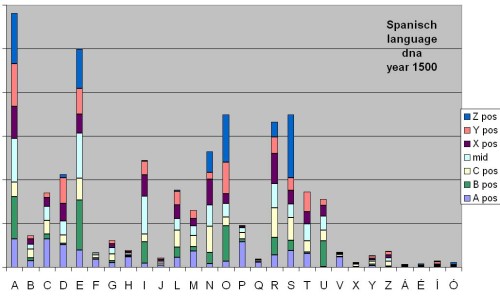 If you look closely there are many differences:

In order to see if we can redesign the VMS alphabet we first have to look at the transcription of e,c and h

Looking at the linear transcription there have been made some decisions on letters.

In order to calculate the % of occurence, the total letters in cAB approximately is:

look at the ‘cc’ on the 3 occurences:

As you can see above these 3 occurence of ‘cc’  really must have been ‘ch, ce all along. 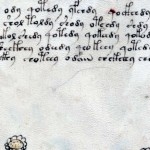 Conclusion: the linear transcription of these digraphs are doubtful: cc, ce, eh.

When i was struggling with the fact that i needed to “create” 5 more letters in the VMS in order to approach Latin, I realized that perhaps i should remove the nonsense-letters first, and then i could perhaps see a piece of the real-vms dna.

But which letters are the nonsense-letters ?

update 2016: That is now under intensive investigation!