San Marino is a very small republic inside Italy proclaimed in the year 301.  This country is very old and very small and therefore it is called a microstate.  The surface is about 61 square km with 32000 people. Language Italian.

See also coats of arms of the municipalities here

The official description of the coat of arms is:

“The official coat of arms of the Republic is surmounted by a closed crown, the symbol of sovereignty

The shield is azure, three mountains vert, towers argent, windowed, embattled and masoned sable, surmounted by ostrich plumes argent. The shield is surrounded by two branches vert, overlapped in saltire below the shield, one of laurel, the other of oak, fructed or. On a ribbon argent the motto LIBERTAS in capital letters sable.”

The components of the coat of arms are in detail:

In the blue shield there are three green mountains with three silver towers, each decorated with a weather vane consisting of a silver ostrich feather. The towers symbolize the three citadels of San Marino (La Guaita, La Cesta and La Montale), while the hills represent the three summits of the Monte Titano.

The motto “LIBERTAS” (Lat. freedom). It possibly refers to the taking in of victims of political persecution in the earlier years of San Marino, and to the amazing maintenance of independence in the midst of many larger states. The motto could also have developed from the alleged last words of the founder Marinu “Relinquo vos liberos ab utroque homine” (Lat. “I leave you free from both men”).
An oak and laurel branch, which surrounds the coat of arms are symbols for the stability of the republic and the defense of the liberty.

A crown, which serves as symbol of sovereignty.

So the feathers on the towers are from an ostrich.  But why? and what is the meaning?

Each of the towers is, they say, equipped with a metal wane at the top, that is in heraldic interpretation pictured as feather. Compare, e.g. Smith 1982. 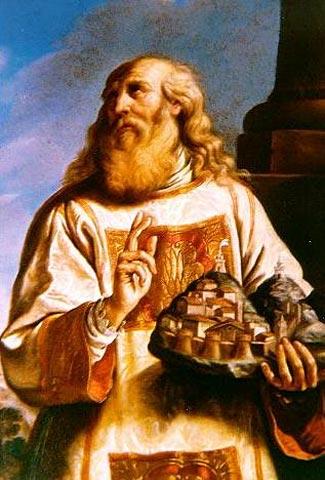 San Marino was founded in 301 AD when the Christian stonemason Marinus the Dalmatian, (later: Saint Marinus) emigrated in 297 AD from the Dalmatian island of Rab, then a Roman colony (now Croatia).

Marinus the Dalmatian, or Marinus from Arbe (as Rab was called also) was a stonemason and his friend Leon from Arbe sailed to Rimini.   When the emperor Diocletian issued a decree calling for the reconstruction of the city walls of Rimini (place at the beach of Italy),  which had been destroyed by Liburnian pirates, the Christian Marinus and Leon flee to avoid persecution an Marinus hid on the peak of Mount Titano.

Mount Titano is the highest of San Marino’s seven hills.

Marinus use to work on the stones of Monte Titano, some kilometers west of Rimini and he got blessing of the bishop of Rimini (St Gaudentius of Rimini) to settle a small community there. The community was under patronage of Donna Felicisima of Rimini. When she died she asked Marinus to stay united in the commune: “Relinquo vos liberos ab utroque homine”.

When Marino died in 366 the Romans have become Christians and Marino was recognized as Saint and the land became San Marino.

Leo decided to remain on Mount Feliciano (also called Monte Feretrio or Feltro), digging a cell in the rock and building, with his travelling companions, a small oratory in honor of God. The settlement,thus founded, will later in history take on the name of San Leo.

San Leo (San Lé in romagnolo) is a Italian small town with 3017  inhabitants, which lies in “della provincia di Rimini, in Emilia-Romagna”.

In the Duomo di San Leo, lies his grave, which is constructed in 1173.

It is certain that the region has been inhabited since prehistoric times, although evidence of the existence of a community on Mount Titano dates back only to the Middle Ages. That evidence comes from a monk named Eugippio, who reports in several documents going back to 511 that another monk lived here. In memory of the stonecutter, the land was renamed “Land of San Marino”, and was finally changed to its present-day name, “Republic of San Marino”.

Later papers from the 9th century report a well organized, open and proud community: the writings report that the bishop ruled this territory.

In the Lombard age, San Marino was a fief of the dukes of Spoleto, but the free comune dates to the tenth century.

The original government structure was composed of a self-governed assembly known as the Arengo, which consisted of the heads of each family (as in the original Roman Senate, the Patres). In 1243, the positions of Captains Regent (Capitani Reggenti) were established to be the joint heads of state. The state’s earliest statutes date back to 1263. The Holy See confirmed the independence of San Marino in 1631.

The community of San Marino perhaps adapted another patron since Marino was not a saint immediately. It could have been Agatha of Catania, Sicily. She was a Christian virgin around year 251 AD. When she was tortured by the Roman senator Quintianus her breasts were amputated which became the symbol of her martyrdom: she is remembered on painting carrying her breasts on a silver platter. She is also patron saint of Malta.

Domagnano Treasure was found in that region.

The Domagnano Treasure is an important Ostrogothic hoard found at Domagnano, Republic of San Marino in the late nineteenth century. The treasure is now divided between various institutions, although the bulk of the hoard is currently held by the British Museum in London and the Germanisches Nationalmuseum in Nuremberg.

We have the founder Marinus the Dalmatian coming from Rab in Croatia.

Following that (https://en.wikipedia.org/wiki/Rab) the language in medieval times was Dalmatian. This language is now distinct, which interest me.

So i asked myself: what is the original language of San in that period?

Neo-Dalmatian is a reconstruction of the now-extinct Dalmatian, or Vegliot, language.

with many scripts and pictures: no specific match. 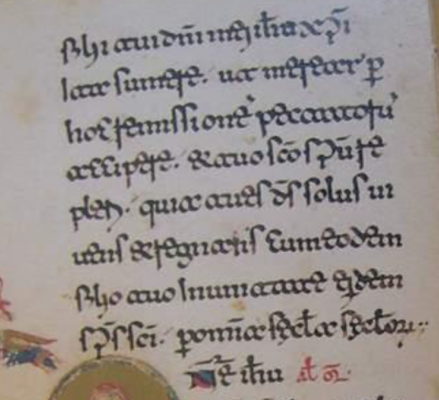 Lingua emiliano-romagnoli: seems to be a dialect and not a real  language.

Can not find text examples transcribed.

San Marino is divided into 9 castelli. (Remember there are 9 circles on the rosette page)

These are the 9 castelli (municipalities) of San Marino:

The swallowtails can be clearly seen. The oldest military formation in the Republic, nominated in the statutes of 1295 were the crossbowmen.

The Crossbow Corps has a continuous history from its first mention in the national statutes of 1295. Described by the Government as “The oldest military formation in the Republic, nominated in the statutes of 1295”, its uniform is medieval in design, and although it is a statutory military unit, it has no actual military function today.

By the mid twentieth century the Crossbow Corps had become largely defunct, save for parading on state holidays; but in 1956 the practice of training its members in crossbow shooting was revived, and a ‘Crossbow Federation’ was formed to encourage competition in this art, so that the unit (although still entirely ceremonial in nature) now again has a very active existence. 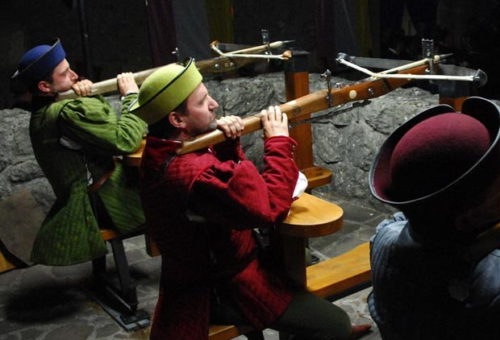 It appears in the book “The Crossbow: Mediaeval and Modern by  Sir Ralph Payne-Gallwey (Author)”.   See also: https://en.wikipedia.org/wiki/Crossbow

The placito feretrano from 1749.  Link to the universita della republica di sanmarino

Castrum or city?  At the end of the Middle Ages San Marino has the typical conformation of the Castrum, a fortified settlement, home to about a hundred families, about 1000 inhabitants as reported by the census of the Cardinal Anglico of 1371. A figure that – without the plague of 1348 – would probably have 1500 people.

San Marino is not a city because it is not an Episcopal Seat (a phenomenon that is only Italian) and it is not even a “quasi-city” like Crema, Fabriano, Prato.

The “battle” of salt.  Rome, after the battle of Agnadello (1509) controls all the Romagna and San Marino is so literally surrounded. The controversial relationship that develops with the papal administration is well represented by the negotiation on the tax of salt: Rome claims to impose on the small republic the purchase of salt at the price fixed in all its territories, while San Marino claims its autonomy and , as a free community, claims to have no obligation. The question continues for the central decades of the sixteenth century thanks to the clever negotiations conducted by the San Marino ambassadors Pinti, Corbelli and Belluzzi. Through hearings and discussions with various pontifical commissions, thanks above all to succeeding in obtaining a brief of Paul III of 1549, in which the pontiff acknowledges that the community of San Marino enjoys freedom: neminem superiorem in temporalibus reconoscit. Through this long diatribe, San Marino succeeds in affirming the idea of ​​its ancient and perpetual freedom. Source  here. 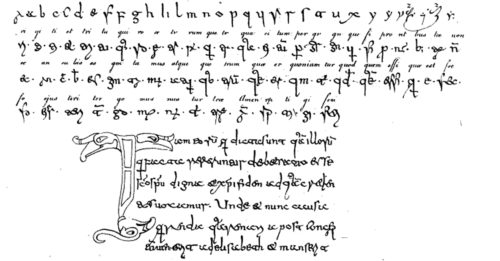