* Trivium stands for 3 paths that can be followed.  (NL: Latijn voor driesprong)

In medieval times the three subjects that were taught are grammar, logic, and rhetoric as foundation of the education. This study was preparatory for the quadrivium: geometry, arithmetic, astronomy, and music.
Combining the trivium and quadrivium results in the seven liberal arts of classical study.

The word is defined in the Middle Ages, but the tradition goes back at least to Plato’s time.

in Greek: ἐπιγραφή
is the study of inscriptions or epigraphs as writing; it is the science of identifying graphemes, clarifying their meanings.

is a kind of bi-directional text, mostly seen in ancient manuscripts and other inscriptions.

style of epigraphy (from στοιχηδόν, a Greek adverb meaning “in a row”) was the practice of engraving ancient Greek inscriptions in capitals in such a way that the letters were aligned vertically as well as horizontally.

is a process in linguistic morphology derivation in which complex words are formed by stringing together morphemes without changing them in spelling or phonetics. Languages that use agglutination widely are called agglutinative languages. An example of such a language is Turkish, where for example, the word evlerinizden, or “from your houses,” consists of the morphemes, ev-ler-iniz-den with the meanings house-plural-your-from.

Agglutinative suffixes are often inserted irrespective of syllabic boundaries, for example, by adding a consonant to the syllable coda as in English tie – ties.

Examples of agglutinative languages include the Uralic languages, such as Finnish, Estonian, and Hungarian.

Almost all Austronesian languages, such as Malay, and most Philippine languages, also belong to this category, thus enabling them to form new words from simple base forms. The Indonesian and Malay word mempertanggungjawabkan is formed by adding active-voice, causative and transitive affixes to the compound verb tanggung jawab, which means “to account for”. 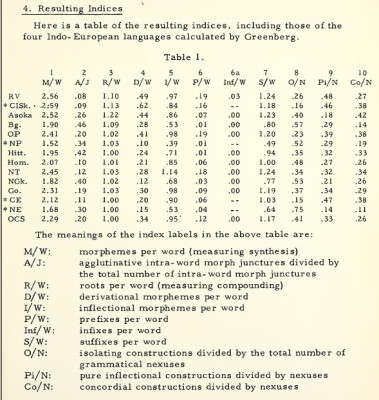 Very interesting to me is it that the Maori and Hawaiin language DNA’s, both Austronesian languages with extreme high agglutination, have a good alphabet with respect to the VMS because of the compactness. Although the dna does not match we can conclude that we are looking for a language with a high agglutination, but with a small wordlength.

But if you read the paper ‘An empirical test of the Agglutination Hypothesis’ by Martin Haspelmath, you will find out that it is not based on a good emperical formula.

Conclusively:  the agglutination – fusinal theory can not be used for identification.

is the theory and methodology of text interpretation, like the interpretation of biblical texts, wisdom literature, and philosophical texts. More info

Macaronic refers to text using a mixture of languages often in combination with hybrid words.

1. literature regarded as a fine art, especially as having a purely aesthetic function.
2. light and elegant literature, especially that which is excessively refined, characterized by aestheticism, and minor in subject, substance, or scope.
Origin of belles-lettres Expand 1700-10; < French: literally, fine letters.
Literary works, esp essays and poetry, valued for their aesthetic rather than their informative or moral content

A pasigraphy (from Greek pasi ‘to all’ and graph ‘write’) is a writing system where each written symbol represents a concept (rather than a word or sound or series of sounds in a spoken language).