The equator divides the planet into a Northern Hemisphere and

a Southern Hemisphere, and has a latitude of 0°. 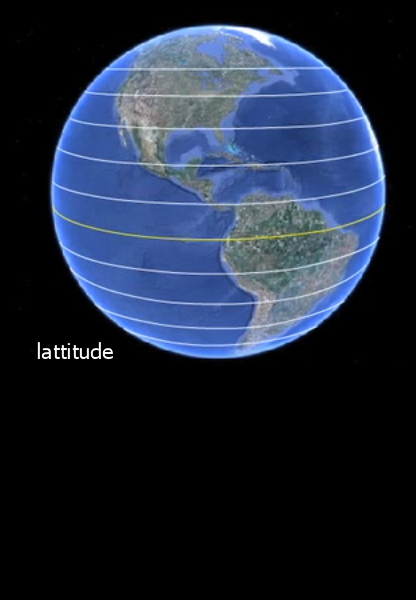 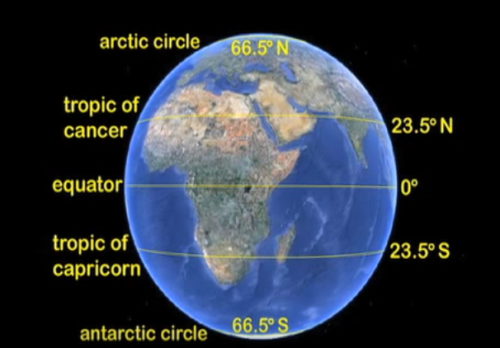 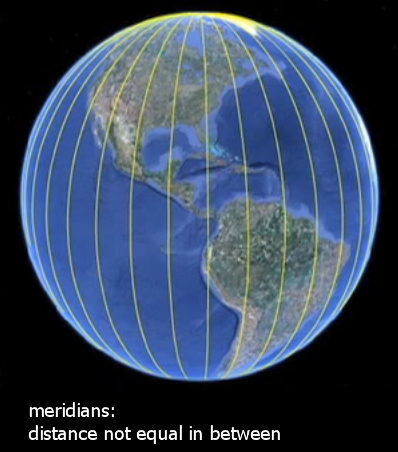 The earth rotates from West to East  (in this picture to the right).

Pictures with black background are from the video: https://www.youtube.com/watch?v=swKBi6hHHMA

The angle from the center of the earth towards any observed place in measured in latitude degrees, also shows the angle from the equator as base, towards that place.
This means, that the lines are just a guide to establish that number of degrees.

Because there are so many time differences on the longitude axis, but yet it is inconvenient as a standard, we agreed to use different time zones.

The GMT, Greenwich Meridian Time, is accepted as uniform time.
And also the General Dateline has been set to make sure that it is clear that the East of that line has another earlier date, then the West of that line.

Fortunate Isles  or Isles of the Blessed[1] (Greek: μακάρων νῆσοι, makárôn nêsoi) were the islands in the atlantic ocean.  Ptolemy used these islands as prime meridian through the Middle Ages in his maps. Modern geography names these islands Macaronesia.

In history there was some confusion about the exact location of these islands.

In greec culture they were associated with the Elysian fields: …where the air was never extreme, which for rain had a little silver dew, which of itself and without labour, bore all pleasant fruits to their happy dwellers, till it seemed to him that these could be no other than the Fortunate Islands, the Elysian Fields.[2]

Elysium or the Elysian Fields (Ancient Greek: Ἠλύσιον πεδίον, Ēlýsion pedíon) is a conception of the afterlife that developed over time and was maintained by some Greek religious and philosophical sects and cults. Initially separate from the realm of Hades, admission was reserved for mortals related to the gods and other heroes. Later, it expanded to include those chosen by the gods, the righteous, and the heroic, where they would remain after death, to live a blessed and happy life, and indulging in whatever employment they had enjoyed in life.

A feature of the fortunate islands is the connection with the god Cronus; the cult of Cronus had spread and connected to Sicily, in particular in the area near Agrigento where it was revered and in some areas associated with the cult of the Phoenician god Baal.