The zodiacs are apparently  depictions of zodiacs, because

– Read this page as well–

Why are there pages with more circles than others ? 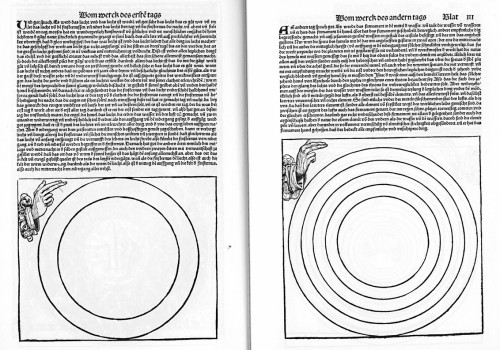 The rights says:  Von werk des anderen tags => of other days
“Am andere tag sprach got=> on the other day God spoke”

Very interesting to see:   * the text does not use Buchstaben (capitals) on the words as is common for Werk/Tags/ Got

Then there is the third day and fourth day with more circles.
The fifth till the seventh day have different pictures.

and of course these pages tell about the christian biblical creation of life by god.
-see also here-  in Genesis.

A lunisolar calendar is a calendar in many cultures whose date indicates both the moon phase and the time of the solar year. 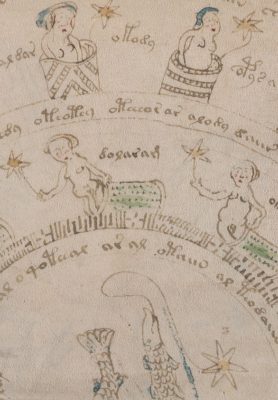 Why are the ladies in the zodiac pages drawn as sitting on or in barrels?

If we look at the first mappa mundi, such as the well known Catala World Atlas from 1375.

Cities, churches and other important places are shown as round walls and something coming out of that round structure.

This can be seen even more clearly in the  Angelino Dulcert: an classical Italian cartographer around 1339:

But another indication can be found, during researching the Aratus Solensis. 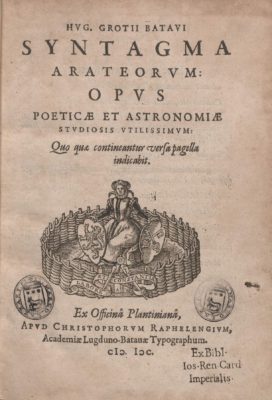 Abstract
intended to be a scientific textbook for monks.
The manuscript is brief at nine folios, and was designed as a compendium of cosmographical knowledge drawn from early Christian writers such as Bede and Isidore, as well as the later Abbo of Fleury.

The twenty complex diagrams that accompany the texts in this pamphlet help illustrate them, and include visualizations of the heavens and earth, seasons, winds, tides, and the zodiac, as well as demonstrations of how these things relate to man. Most of the diagrams are rotae, or wheel-shaped schemata, favored throughout the Middle Ages for the presentation of scientific and cosmological ideas because they organized complex information in a clear, orderly fashion, making this material easier to apprehend, learn, and remember.

Moreover, the circle, considered the most perfect shape and a symbol of God, was seen as conveying the cyclical nature of time and the Creation as well as the logic, order, and harmony of the created universe.

England is especially notable for the production of illustrated scientific textbooks, with the earliest examples produced during the Carolingian period under the influence of the noted Benedictine scholar Abbo of Fleury, who taught at Ramsey Abbey for two years. Although the grouping of texts and diagrams here is unique, the manuscript is related to other scientific compilations from this era, such as British Library, Royal Ms. 13 A.XI, Cotton Ms. Tiberius E.IV, and Oxford, St. John’s College, Ms. 17.

A title, added in the thirteenth century, reads “Tractatus de sphera;” at the center of the diagram: “Terra”; in the fourth ring, the twelve months of the year; in the rim of the wheel, an inscription, beginning at ten o’clock: “hec tempora queque sidera septena per signa gerunt duodena in celo cursus eadem repetentia rursus per signum quodque retinent,” or “The times carry the seven planets through the twelve constellations in the heavens. Their courses retain them [the planets], returning again through each constellation.” 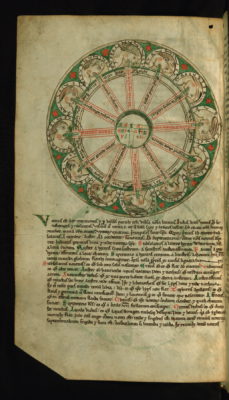 The wheel diagram at the top of the page shows the Earth at center, with the seven heavenly bodies–the Moon, Mercury, Venus, the Sun, Mars, Jupiter, and Saturn–orbiting in concentric rings.

f2v shows, the “wandering stars” and multiple rings with the text:

From the outer ring, moving inward: “Saturnus fertur explere circulum suum per annos triginta,” or “Saturn is said to complete its circuit in thirty years.”

“Vesper peragere dicitur circuli sui partes quindecim annis,” or “Vesper [should be “Mars”] is said to pass through its circuit in fifteen years.”

“Sol fertur circulum suum explere per annos viginti,” or “The Sun is said to complete its circuit in twenty years.”

“Lucifer percurrit circulum per annos novem,” or “Lucifer [Venus] runs through its circuit in nine years.”

folio 4r: phases of the moon:

…the Moon’s phases are determined by the extent of its illumination by the Sun. The cycle begins with the new, crescent Moon at upper right (approximately 2 o’clock) and moves counterclockwise, with the days of the lunar cycle given in red.

folio 5r: The harmony of the spheres; & : The planetary orbits

The idea of the harmony of spheres – that numerical proportions corresponding to musical harmonies governed both the movement of the seven heavenly bodies and their distance from the Earth – was taken up by medieval writers from ancient thought.

In the illustration of the harmony of the spheres in the upper part of the page, the Sun, the Moon, and the five known planets are depicted as seven discs of equal size. Between them are written musical intervals — a tone (tonus), a semitone (semitonium), or three semitones (tria semitonia).

In his De natura rerum, Isidore of Seville (d. 636 CE) relates the zones to the five fingers of the human hand.

“Emerinos in Latin is called the day and the night.”

f7r:  Diagram of the terrestrial climate zones with the 7 Riphaean mountains 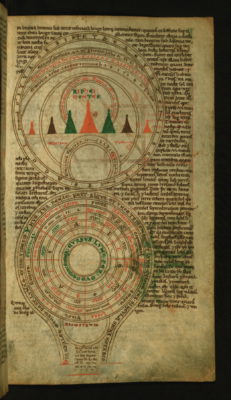 Label: In the diagram in the top half of the page, the observer’s point-of-view is the North Pole. This diagram is similar to the one in the lower part of fol. 6v, except that it also shows the Riphaean Mountains, Riphei Montes, – a mythical range of peaks thought to mark the boundary between Asia and Europe, and the Arctic and North temperate zones — represented as seven abstract, colored silhouettes resembling triangular game-pieces.  -wiki-

Are the 6 rosette center containers representing the Riphaean mountains ?

Below the Riphaean Mountains, in red: “Quintus,” or “Five.”

In the version of the diagram of the terrestrial climate zones in the St. John’s Computus, an English manuscript made ca. 1110 at the monastery of Thornley in Cambridgeshire, the Riphaean Mountains are represented as a zig-zag; see Oxford, St. John’s College MS 17, fol. 87v.

The Sun is portrayed in the upper left corner, “Ennagonus Sol,” or “The seven-fold Sun.”

the Moon in the lower right. The four elements, Earth, Air, Fire, and Water,

The wheel-shaped diagram in the bottom part of the page visualizes the idea that Man is a microcosm of the universe, and the universe a macrocosm of Man. Within the ring at center are the words (reading from top to bottom) “World,” “Man,” and “Year.”

Both of these wheel-shaped diagrams resemble in their structure the diagram of the microcosmic-macrocosmic harmony.

The eight intersecting arcs of the top diagram show the relationships among the four seasons, the four qualities of the year, the four cardinal directions, and the dates of seasonal changes. Thus, this diagram illustrates the notion of the unity of time and space as expressed in the Spanish scholar Isidore of Seville’s (d. 636 CE) scientific work,

The bottom diagram illustrates the relationships among the four elements – Earth, Air, Fire, and Water

This wheel-shaped diagram illustrates the monthly movement of the tides, and tides and the age of the Moon.

The T-O map of the inhabited world occupies the diagram’s center. The twelve sectors contain brief characterizations of the twelve winds.

The first of the three outer rings shows four tidal cycles of seven or eight days each; the next ring, labeled “water” (aqua) thirty times, represents the ocean surrounding the world.

The T-O map is a conceptual diagram intended to show the relative positions of the three continents. The T, the Mediterranean Sea, separates Asia, Europe, and Africa, while the O is the surrounding ocean.

Although the origins of the T-O map lie in the literature of classical antiquity, some of the earliest surviving pictorial examples occur in early medieval manuscripts of the works of Isidore of Seville.

This wheel-shaped diagram sets out the degrees of kinship that determine whether two individuals related by blood may marry. Diagrams of consanguinity also were used to determine inheritance when the deceased left no will.

The six concentric rings of the diagram represent six generations of a family. Each ring is divided into ten sectors, in which are written the bloodlines of family descent and connections. 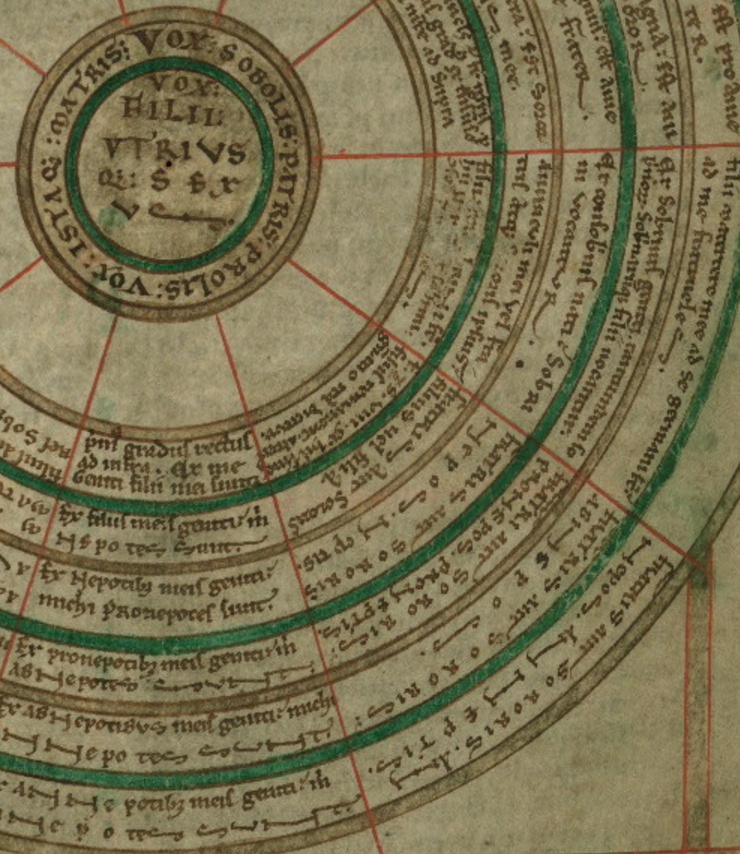 At the center of the diagram: “Vox filii utriusque sexus.” (The voice of the children of both sexes)