The full story on the cipher that Mary, queen of Scots used and finally led to the execution of the last royal of Scotland, in what is called “the Babington plot”,  is quite a long and interesting one. It shows how ciphers worked, how crypto-analysis was rising and how espionage, executions and murder forms the basis of the kingdoms in medieval times.

It’s not really different from what nations are doing these days and it’s no surprise we can also draw a parallel to our beloved manuscript the Voynich.

First let me show you this allegorical drawing: 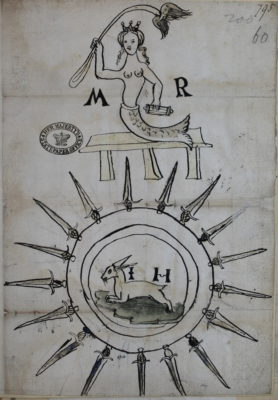 Mary paid a heavy price for her impetuous marriage to James, Earl of Bothwell. Not only did she forfeit her crown, but her reputation. In this allegorical sketch, the fallen Scottish queen is depicted as a mermaid, a symbol of prostitution. Elizabeth made the most of her rival’s disgrace and promoted herself even more vigorously as the virtuous Virgin Queen. It was a vindication of the personal sacrifices that she had made in the interests of her country.

Sketch is based upon a scabrous placard that first appeared in March of 1567.

This insulting image appeared on the Mercat Cross (which can still be seen today on Edinburgh’s famous High Street, “The Royal Mile”) soon after Darnley’s murder. Mary is represented by the initials M R on each side (Maria Regina) of a mermaid which was itself a synonym for a prostitute. The hare refers to Bothwell’s coat of arms and the surrounding daggers point to him as the murderer.  Source rext and more objects here.

Mary had aroused indignation in Scotland when she married James, Earl of Bothwell, widely thought to have killed her second husband, Lord Darnley. In a separate sketch Bothwell is represented as a hare, the crest of his family the Hepburns.

Mary is naked to the waist and with a crown on her head, is depicted as a mermaid—commonly used for whorish sirens. Also bare breasts and loose hair were a way of showing that she is prostituting herself.

Because the official Royal arms of Mary as Queen of Scots and Dauphine of France, was a dolphin it is of course even more ridicule to make an image of her as a mermaid.

In the play of Shakespeare, Midsummer’s night dream, Queen Mary is called a mermaid is under discussion.

Queen Mary seems to hold on her left hand a scroll, probably the ciphered manuscript on which she was found guilty and on her other hand it looks she is holding a seed of a plant.

Now, have a look at a part from the bathing section, page f79v 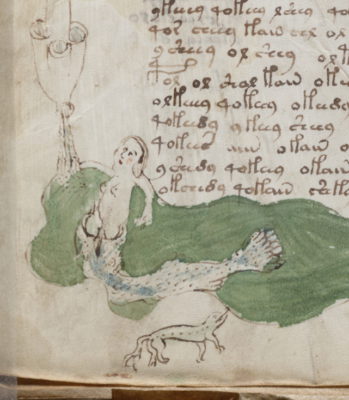 Probably we are looking at exactly the same allegorical picture: a mermaid woman as prostitute.

There is slight difference here, because we see some part of her legs, it seems like she stands in a container, and that has the mermaid-form; the tail is not connected to her body.

Furthermore, if you look at the symbols used in the letters it seems more than a coincidence that we find the VMS symbol for x (occurs about 35 times) also is found in the nomenclatures of Mary.

And an animal alike the one beneath the mermaid can be found on this picture:

Shown here is an image of Mary shortly after her marriage in 1558. With her is her husband, Francois. As eldest son of the French King, he took the title of Dauphin (or ‘Dolphin’) of France. He became king in 1559.

The image is taken from the Forman Armorial, a 16th-century manuscript which contains Scottish coats of arms. (NLS reference: Adv.MS.31.4.2) 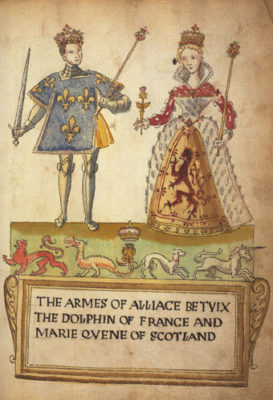 Some occurrences of x in the VMS: f46r and f55r, f66r with the character transcribed as x:

The symbol used by Mary is the ligature “CT”.

We also find on the Cecil (state secretary of state UK) cipher list, that the letter i represent this character:

Stafford was the queen’s ambassador to France. Written in the anxious months between the execution of Mary Queen of Scots and the coming of Philip II’s Armada, the letter describes a clandestine meeting with King Henry III of France.

Look a the ciphered words, misspelled on purpose:

After this small analysis you can see that two opposite parties in time around 1587, used similar symbols for their ciphers and they have different meanings, there are many more similar symbols used.

In that light it is very awkward that the “gallow characters from the VMS are never seen in other manuscripts before.

That is to say, a gallow character is used by marking the last incriminating letter of Mary, Queen of Scots, by the cryptographer Phellipes that made another copy of the letter for Walsingham, doodling an ominous gallows on the paper.  That gallow signalled: to the gallows.

I was unable to locate the actual character but in The Cipher Book, it mentions the character looks like a straight cornered bench.

Now if we look at this cipher, we see a very interesting (rare) symbol: 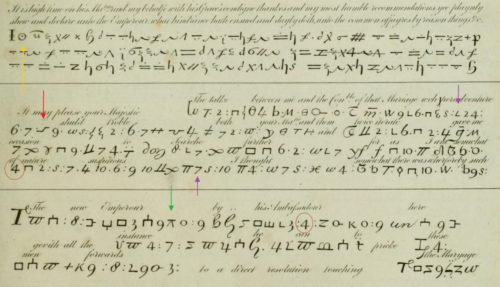 These are similar to the symbols used on f57v (see the middle blue arrow):

The blue (arrow) symbol is in the VMS used in a mirrored orientation.

In the cipher the blue arrow symbol stands for r, and the yellow arrow symbol for [r] or o. Both exactly mirrored.

The source of this cipher page from 1563 is interesting.

But also to be found in the Rees‘ Cyclopaedia Vol.4 at a higher quality: 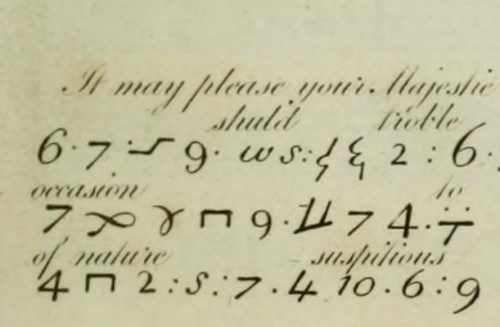 Who invented/made this cipher and are there more, probably older ones, from that same hand or secretary ?

August 20.  Smith to the Queen. Year 1563
The talk between him and the Constable of the marriage, which would peradventure trouble her and them, gave him occasion to search further. He found that the French marvellously fear a marriage to be made between the King of Spain’s son and the Queen of Scotland, which the Guisians take for concluded. This is the drift of the Cardinal of Lorraine, the Pope, and the Fathers of the Council of Trent, with certain factions, to give in dowry the realm of England to them for reducing it to the Romish Church, and likewise the goods of the French Protestants; persuading themselves that they have in Scotland, and also in England, enough of their faction, with whom also they have dealt to bring the matter to pass.

In 1540 Smith went abroad, and, studied in France and Italy. Took the lead in the reform of the pronunciation of Greek. 1543 he was appointed the first Regius Professor of Civil Law.

Sir Thomas was an early convert to Protestantism, which brought him into prominence when Edward VI came to the throne being appointed Secretary of State. Was made the Secretary of State, and was sent on an important diplomatic mission to Brussels. In 1548 he was knighted.

On the accession of Queen Mary I he lost all his offices, but in the reign of her sister, Elizabeth I, was prominently employed in public affairs.

Sir Thomas Smith, was sent to France from 1562 to 1566. Smith used his own cipher. Smith’s cipher, was delivered after his departure:

“Has not received his cipher, which he should have before he leaves Dover.
Smith to Cecil, Sittingbourne, 21 September 1562 (CSP, Foreign, Elizabeth, v) ”
From source or: archive

William Cecil, Secretary of State, routinely used cipher with various correspondents,
has apparently made a new cipher for Smith when he left for France and send it to his house on 20 sept 1562. 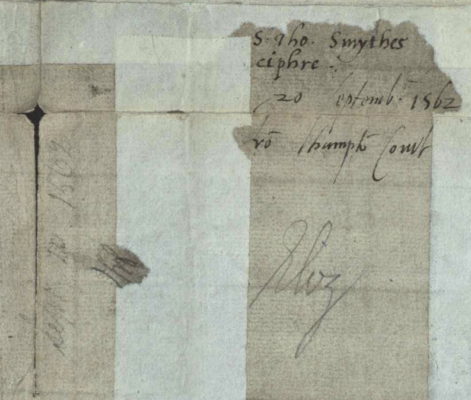 Here are some interesting letter columns from the cipher pages.

(pictures thanks to Sam Kaislaniemi)

This day (22nd Sept.) at 7 a.m. received Smith’s letter of yesterday that he had not the memorial or the cipher. On Sunday night they were delivered at his [Smith’s] house in London. He shall not enter into the message of the last charge to open the declaration until he is sure that they shall enter the port on the other side. He cannot tell whether the men shall go or not; he will send as soon as it is settled; if Smith hears of it there for certain, he is to follow his charge. They begin to hear of accord, then they will lose much labour.—Hampton Court, 22 Sept. 1562. Signed.  Orig. Hol., with armorial seal. Add. Endd. Pp. 2. source

And now we see the symbol we are looking for (with the dot) is not an r, but an e. The deciphering must not have been per adventuor, but peradventure. So the symbol represents an e.

All (also deciphered) correspondence, also with Smith, can be found here: https://archive.org/stream/calendarstatepa02britgoog#page/n616/mode/2up 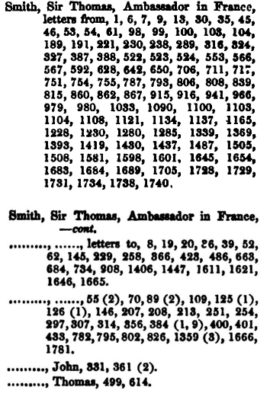 Who were these “Secretaries of State” and how many?

On wikipedia it says: In the Middle Ages the kings of England were attended by a cleric called the “king’s clerk” and later “secretary”, who dealt with their correspondence. Until the reign of Henry VIII, there was usually only one secretary, but under him a second appeared. In the time of Elizabeth I (1558–1603) these men gained the title “Secretary of State”.

After investigation of the Smith cipher of 20 aug 1563, here is a short cipher version: 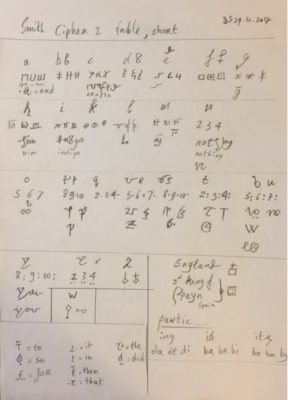 It seems that the symbol must have been intended to be used without the dot.

Because the letter e does not require a dot, and the previous symbol is must probably a 7 with either 1 dot (in that case it would represent a r) and in another case it would have been the letter u with two dots.

Here are my paper results for the records: 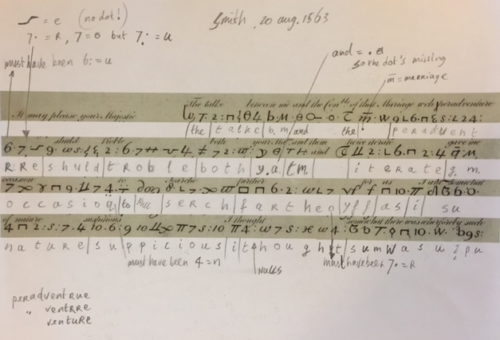 But, in order to be very sure. Let’s try to find out if there is another cipher message with that character.

Now, with the much appreciated help of Sam, I’ve obtained a view on the original letters of Smith. The conclusion can be drawn that the letter that was previously analyzed of 20 aug 1563 Smith letter seems to be a badly copied letter.  The mistakes I’ve located were not in the original letters, see below.

On one hand it’s nice to learn that it proves that the ciphering by Smith  is done precisely and not, as I first assumed, was done with a lot of mistakes.

Here is part of the original letter (SP70.62.171r top) and the copied one with some of the mistakes:

It seems we needed the following:
the Secretaries of State: State Papers Foreign, Elizabeth I. Volume 6, 1563, ed.

Which are now digitized @ www.nationalarchives.gov.uk and perhaps also in the Internet archive.

The National Archives of the UK (TNA) at Kew, in London

Calendars of documents in  70 can be searched using State Papers Online.