Checking the languages Welsh and Icelandic and their DNA and orthographic , i wondered why i did not sort the ‘counts’ on the language DNA before.

Ordinary i used the alphabet letters from a-z to sort the language DNA, but never on the ‘total count of ABCmidXYZ together’.  Doing so, for the first time, i used the Currier A and B text, where all pages with short text, such as picture pages, have been deleted.

I reference to that worktext as ‘CAB NST’ (currier A+B no short textpages). This is it: 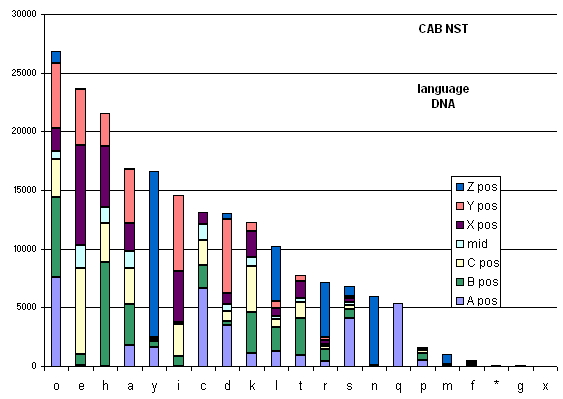 The CAB text has some very distinctive features. They are:

Then, i analyzed a dozen languages that I’ve already done and some more and sorted those in the same manner. This did not strike resemblances. Mainly because of the VMS characteristics mentioned before.

If the VMS has been written backwards (mirrored) the DNA graph would look like this: 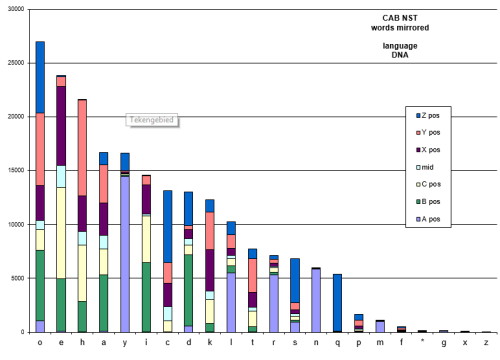 As you can see it does not change the DNA in itself, it mirrors the bars of each individual letter: what was the last letter became the first and so on.

Then i looked also at the repetition of the words in the VMS compared to Latin and many more languages.

You can find the Pseudo code to generate the language dna on the bottom of the page where some variations on the Voynich text are shown.