Susan Verberg collected many medieval recipes of soap (and other things) and it’s a comprehensive work:  http://bookeofsecretes.blogspot.com/

All her papers can be downloaded here: https://independent.academia.edu/susanverberg

The main paper is  “A most Copious and Exact Compendium of Sope.”

See below a excerpt.

A recent (2015) discovery of an potion from Bald’s Leechbook, surprised researchers. 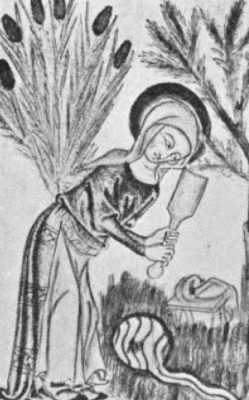 The following are pages 7 and 8 from “The_signes_that_Sope_giueth_in_seething”

The Medieval history of soap

The first known written mention of soap was on Sumerian clay tablets dating to about 2800 BC
suggesting the Babylonians knew about soap and how to use it. (Bramson 1975)
While soap was well known in Arabic culture where, unlike Christianity, Muslim
religion required a clean body, soap as a body cleanser was repeatedly discovered to
be forgotten in European history (seemingly coinciding with the rise and ebb of
communal bathhouses) and is completely unknown in China. (Ashenburg 2007) It is
not until the Turks, who conquered the Arabs and soap, and then invaded the
Byzantine Empire, that soap was reintroduced back into Europe to stay.
(Bramson 1975)

The first mention made of soap being used on a human body for cleaning was in the 4th century: French soap was described by Theodorus Priscianus as a material for washing the head. (Dunn 2003)

By the 7th century Italian soapmakers were organized into craft guilds and the profession of
soap-boiler is mentioned in Charlemagne’s Capitulare de Villis of 805 AD. 1 Early soaps were
usually made with tallow and wood ash lye making them rather unattractive to look at, as
leftover tannin in the ashes will stain the lye (and soap) brown. Techniques for the production of soap improved but cakes of soap remained relatively soft. By the eight century, soap made with oils was common in France, Italy, and Spain, as olive oil was widely available, but the rest of Europe, which made tallow soaps, rarely used it until the 17th century.

By the 12th century, hard soap came into use which was said to be an Arab development later
imported into Europe. A 12th-century Islamic document describes the process of soap
production. (Salhiyyeh 1998) It mentions the key ingredient, alkali, which is derived from the
Arabic word al-qaly meaning ashes. By the 13th century, the manufacture of soap in the Islamic world had become virtually industrialized, with sources in Nablus, Fes, Damascus, and Aleppo.
It is generally accepted that soap was known in England by the 10th century, most likely
introduced by the Celts. Tallow soap production began in England at around the end of the 12th century, as a remark from Richard of Devizes, a monk from the 12th century, shows about the number of soap-makers in Bristol and the smelly nature of their profession. As soap was considered a luxury, English soap manufacturers had to pay a heavy tax on all the soap they made. Because of this heavy tax, soap was very expensive, sometimes even cost prohibitive, and did not come into common use in England until after the tax was repealed in 1852! (Bramson 1975)
Around the thirteenth century, Marseilles emerged as the first great center of European
soap making and remained so throughout the Middle Ages. Genoa, Venice, and Bari in
Italy and Castile in Spain also became epicenters of soap making due to their
natural resources. All had abundant supplies of olive oil and barilla, (Bramson 1975) a
sodium rich plant whose ashes were used to make soda lye, a perfect combination to
make a beautiful hard white bar of soap. Since hard soap can be shredded and
reformed soap balls came into being, a luxury product used by the upper classes. 2
During the devastating plagues in the Middle Ages bathhouses were closed and washing in
general was deemed unsafe as the prevailing believe was bad vapors corrupt an otherwise
healthy body which would have access through open pores, ie clean skin. Great faith was placed in herbs and plant essences as cures and preventatives, and it was to these that many citizens turned, rather than to soap, water and rat-killers, all of which would have been of far more use.

In Tudor times botanicals were introduced into soap, and scented soap became a “must-have”
item of the elite. Many soap ball recipes originate from this era. Some of them are simple, many are quite sophisticated and not all are all that safe to duplicate today as we now know many of the ingredients used then are actually skin irritants, if not downright poisonous. 2
Fine soaps were produced in Europe from the 16th century on, and many of these soaps are still produced, both industrially and by small-scale artisans. Castile soap is a popular example of the vegetable-only soaps evolved from the oldest “white soap” of Italy.
To summarize, soap has been known and used throughout recorded history but the widespread use of soap as we do now is relatively new. Soap was considered a luxury; it was hard to make and expensive to buy and would mostly be used where it was needed, an ingredient in medicines, to clean laundry and household goods. As most of medieval Europe was Christian and Christian religion did not place much interest in personal hygiene (Christianity is one of the few religions where personal hygiene is not minutely dictated), cleanliness was up to regional cultures, superstitions and whatever belief medical society would subscribe to. Not only became dirty old hermits to be seen as very religiously pure – drawing a connection between dirty of body and pure of mind; with physicians believing bad vapors were behind most ailments and that a clean body would open the pores to let them in, bathing soon became something to avoid. So for most of medieval Europe soap and water were for cleaning clothes and people cleaned themselves by changing their under linens and using fragrances to cover up, as much as was possible, any body odors. (Ashenburg 2007)