The Emerald Tablet, also known as the Smaragdine Table, or Tabula Smaragdina, is a fictive tablet described probably firstly in between the 6th and 8th century by a Arabic. 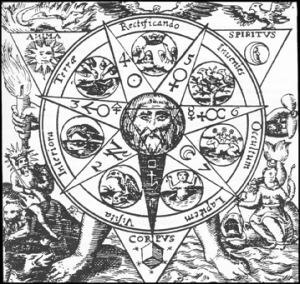 Picture: alchemical drawing called the Azoth of the Philosophers.
A diagram of the Emerald Formula based on Eastern mandalas for meditation or reflection.

It should has been molded out of a single piece of green crystal, and carries a prophetic message full of hidden meaning. Although its true origin is lost in legends that go back in time. The text has been translated by Newton and others, such as Roger Bacon. link: http://en.wikipedia.org/wiki/Roger_Bacon and http://plato.stanford.edu/entries/roger-bacon/

The tablet was highly regarded by European alchemists as the foundation of their art and its Hermetic tradition.
http://en.wikipedia.org/wiki/Emerald_Tablet

Johannes Trithemius (1 February 1462 – 13 December 1516), born Johann Heidenberg, was a Benedictine abbot and a polymath active in the German Renaissance, as a lexicographer, chronicler, cryptographer and occultist. He took considerable influence on the development of early modern and modern occultism; among his students were Heinrich Cornelius Agrippa and Paracelsus. Trithemius’ most famous work, Steganographia (written c. 1499; published Frankfurt, 1606) ? What happened in 100 years
http://en.wikipedia.org/wiki/Johannes_Trithemius
Heinrich Cornelius Agrippa von Nettesheim (15 September 1486 – 18 February 1535) was a German magician, occult writer, theologian, astrologer, and alchemist.
One of his books: Declamation on the Nobility and Preeminence of the Female Sex, 1529.
http://en.wikipedia.org/wiki/Heinrich_Cornelius_Agrippa

Paracelsus (/ˌpærəˈsɛlsəs/; born Philippus Aureolus Theophrastus Bombastus von Hohenheim, 11 November or 17 December 1493 – 24 September 1541) was a Swiss German[3] Renaissance physician, botanist, alchemist, astrologer, and general occultist.[4] He founded the discipline of toxicology.[5] He is also known as a revolutionary for insisting upon using observations of nature, rather than looking to ancient texts, in open and radical defiance of medical practice of his day.[5] He is also credited for giving zinc its name, calling it zincum,.[6][7] He introduced terms such as “gas”, “chemistry”, and he also coined the Arabic word “alcohol”.[8] Modern psychology often also credits him for being the first to note that some diseases are rooted in psychological illness.[9]
http://en.wikipedia.org/wiki/Paracelsus