Where a reference was made that is very interesting:

Ellie Velinska pointed out a drawing in Nicole d’Oresme’s Livre du ciel et du Monde (1377) that looks very much like the “nebula” on f68v3. 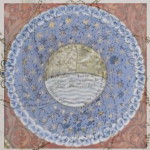 I thought that probably many people investigated the comet in relation to the VMS.
However, i coul not find a serious attempt.

In 1456, the year of Halley’s next apparition, the Ottoman Empire invaded the Kingdom of Hungary, culminating in the Siege of Belgrade in July of that year. In a Papal Bull, Pope Calixtus III ordered special prayers be said for the city’s protection.

In 1470, the humanist scholar Bartolomeo Platina wrote in his Lives of the Popes that,[71]

A hairy and fiery star having then made its appearance for several days, the mathematicians declared that there would follow grievous pestilence, dearth and some great calamity. Calixtus, to avert the wrath of God, ordered supplications that if evils were impending for the human race He would turn all upon the Turks, the enemies of the Christian name. He likewise ordered, to move God by continual entreaty, that notice should be given by the bells to call the faithful at midday to aid by their prayers those engaged in battle with the Turk.

Platina’s account is not mentioned in official records. In the 18th century, a Frenchman further embellished the story, in anger at the Church, by claiming that the Pope had “excommunicated” the comet, though this story was most likely his own invention.[72]

Halley’s apparition of 1456 was also witnessed in Kashmir and depicted in great detail by Śrīvara, a Sanskrit poet and biographer to the Sultans of Kashmir. He read the apparition as a cometary portent of doom foreshadowing the imminent fall of Sultan Zayn al-Abidin (AD 1418/1420-1470).[73]

After witnessing a bright light in the sky (which most historians have identified as Halley’s Comet, visible in Ethiopia in 1456), Emperor Zara Yaqob, ruler from 1434 to 1468, founded the city of Debre Berhan (tr. City of Light) and made it his capital for the remainder of his reign.[74]