The Norwegian mythology, which connects to the Germanic culture has many ways of representation of Yggdrasil.

Yggdrasil is mentioned the Poetic Edda (13th century) and the Prose Edda written by Snorri Sturluson (Iceland).  Yggdrasil is an holy tree where the gods go daily.Creatures live within Yggdrasil, such as the wyrm (dragon Níðhöggr), and the stags Dáinn, Dvalinn, Duneyrr and Duraþrór.

The cosmology of Norse mythology has ‘nine homeworlds’, unified by the world tree Yggdrasill. Mapping the nine worlds escapes precision because the Poetic Edda often alludes vaguely, and the Prose Edda may be influenced by medieval Christian cosmology.

The identities for the Nine Homeworlds below are common. However the relationships between these and other significant realms have resulted in confusion. Precise mapping remains uncertain. 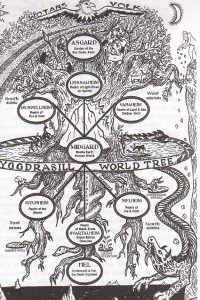 Yggdrasil, the representation of the cosmos, the Tree of Life.

The root in the Æsir homeworld taps the sacred wellspring of fate, the Well of Urðr. The tree is tended by the Norns, who live near it. Each day, they water it with pure water and whiten it with clay from the spring to preserve it. The water falls down to the earth as dew.

Animals continually feed on the tree, threatening it, but its vitality persists evergreen as it heals and nourishes the vibrant aggression of life. On the topmost branch of the tree sits an eagle.
The beating of its wings cause the winds in the world of men. At the root of the tree lies a great dragon, Niðhǫggr, gnawing together with unnamed serpent at it continuously. The squirrel Ratatoskr carries insults from one to the other. Harts and goats devour the branches and tender shoots.

Creation
In the beginning, there were two regions: Muspellsheimr in the south, full of fire, light and heat; and Niflheimr in the north, full of arctic waters, mists, and cold. Between them stretched the yawning emptiness of Ginnungagap, and into it poured sparks and smoke from the south and layers of rime-ice and glacial rivers from the north. As heat and cold met in Ginnungagap, a living Jötunn, Ymir, appeared in the melting ice. From his left armpit, the first man and woman were born. From his legs, the frost jötnar were born, making Ymir the progenitor of the jötnar. Most sources identify Ymir’s oldest son as Thrudgelmir, who bore Ymir’s grandson, Bergelmir. The other jötnar are usually unnamed. Ymir fed on the milk of the cow Auðhumla. She licked the blocks of salty ice, releasing Búri.

Buri’s son Borr had three sons, the gods Odin, Vili and Vé. The three slew Ymir, and all of the jötnar (giants) except for Bergelmir and his wife were drowned in the blood. From Ymir‘s body, they made the world of humans: his blood the seas and lakes, his flesh the earth, his bones the mountains and his teeth the rocks. From his skull they made the dome of the sky, setting a dwarf at each of the four corners to hold it high above the earth. They protected it from the jötnar with a wall made from Ymir‘s eyebrows. Next they caused time to exist, and placed the orbs of the sun and moon in chariots which were to circle around the sky.

Odin, passing through the world of the jötnar, found two beautiful young giants named Sól and Máni, sun and moon. They were brother and sister, and their father had named them after the beautiful lights in the sky. Odin decreed that Sól and Mani should drive the chariots of the sun and the moon across the sky, and to ensure that their journey was always constant and never slowed, he created two great wolves. These wolves were called Hati and Sköll, and they were placed in the sky to pursue the chariots and devour them if they caught them.

Because the tree Yggdrasil was evergreen, its leaves never withering, it served as a meadow and not only for Odin’s goat Heidrun, which supplied the heavenly mead, but also the deer Dain, Dvalin, Duneyer and Durathor whose horns mildew on earth dripping and water for all the rivers in the world provided. So is the tree of life all water on the earth, to emerge and grow and is life to her.

Continuously going up and down of the branches of the tree the squirrel Ratatosk ( branch borer ) a typical restless and craic, who hist time is to tell with the dragon below the remarks of the eagle above and conversely, hoping to raise up strife between them.

Through its three main roots of the tree was such a marvelous height that its topmost bough, Lerad, (peace giver ) Odin’s hall overshadowed while the others are spreading branches crossed over the other worlds. The first branch looks at the homes of the people and the second to the land of the giants where the miracle spring gurgles and she watereth and humidified.

Of course, the tree has to be kept in good condition. This was the duty of the Norns or terror goddesses who sprinkled him every day with the holy waters of the Urdar fountain. If this water trickled into the earth, through the branches and leaves, it supplied the bees with honey. The three Norns sat at his feet. Those were wise saying women, they are called Impermanence, Present and Future. In their lap they prepared their sorrow and suffering, their peace and happiness for the people. Two beautiful swans, white as the driven snow, exhorted the people to fulfill silent and serious their life task.

The norse pantheon applied to the Tree of Life

For more on the number 9:
http://norse-mythology.org/cosmology/the-nine-worlds/

Images:  One is from the often quoted Creed of Iron book and the other is from a book called The Magical Pantheons by Chic Cicero and Sandra Tabatha Cicero.