I am not so very much interested in the esotheric, but after I’ve seen this picture 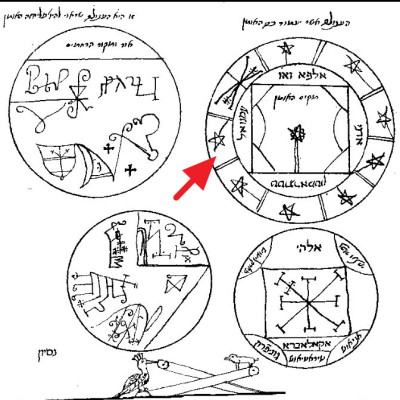 Where the stars have a tail attached to something, i started reading the wiki,

and discovered that is seems difficult to find a view on the original manuscript (Latin: Clavicula Salomonis, Hebrew: Mafteah Shelomoh) that is written before 1500.

According to Claudia Rohrbacher-Sticker, who seems to have examined the contents:

Or. MS. 14759, a manuscript of 53 folios which was acquired by the Hebrew Section
of the British Library in 1993, proved to be a continuation of Or. MS. 6360, a manuscript of 15 folios.^ Written by the same hand, in Sephardic ‘rabbinic’ and square script, and in all probability dating back to the seventeenth or eighteenth century,^ the two manuscripts add up to a complete copy of Sefer Mafteah Shelomoh (‘The Book of the Key of Solomon’).

It looks like this: all pictures copyright Brittish Library: 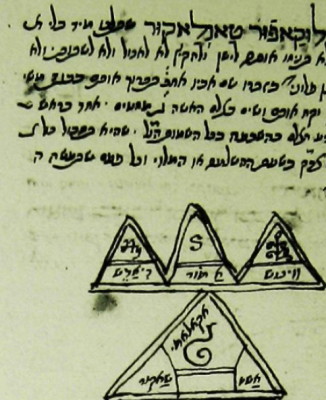 Ah, here it is. some interesting details : http://www.bl.uk/manuscripts/FullDisplay.aspx?ref=Add_MS_14759.

Illustration: folios 1v – 3r: 4 added full-page drawings in grisaille, of the Sacrifice of Isaac and the Temple implements 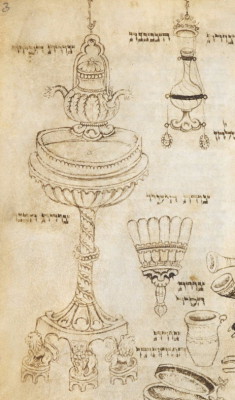 Very strange, it does not look, and i can not find the images where Claudia is talking about.

A Hebrew text survives in two versions, one kept at the British Library, on a parchment manuscript, separated in BL Oriental MSS 6360 and 14759. The BL manuscript was dated to the 16th century by its first editor Greenup (1912), but is now thought to be somewhat younger, dating to the 17th or 18th century.[2] The discovery of a second Hebrew text in the library of Samuel H. Gollancz was published by his son Hermann Gollancz in 1903, who also published a facsimile edition in 1914.[3] Gollancz’ manuscript had been copied in Amsterdam, in Sephardic cursive script, and is less legible than the BL text.

Sephardic Jews  (Sephardi Jews, Sephardim (Hebrew: סְפָרַדִּי, Modern Hebrew: Sfaraddi, Tiberian: Səp̄āraddî, lit. “The Jews of Spain”), are a Jewish ethnic division in the Iberian Peninsula from about the year 1000). They established communities throughout Spain and Portugal.

Prior to 1492, substantial Jewish populations existed in most Spanish and Portuguese provinces. Among the larger Jewish populations in actual numbers were the Jewish communities in cities like Lisbon, Toledo, Córdoba, Seville, Málaga and Granada. In these cities, however, Jews constituted only substantial minorities of the overall population. In several smaller towns, however, Jews composed majorities or pluralities, as the towns were founded or inhabited principally by Jews. Among these towns were Ocaña, Guadalajara, Buitrago de Lozoya, Lucena, Ribadavia, Hervás, Llerena, and Almazán.
In Castile, Aranda de Duero, Ávila, Alba de Tormes, Arévalo, Burgos, Calahorra, Carrión de los Condes, Cuéllar, Herrera del Duque, León, Medina del Campo, Ourense, Salamanca, Segovia, Soria, and Villalón were home to large Jewish communities or aljamas. Aragon had substantial Jewish communities in the famous Calls of Girona, Barcelona, Tarragona, Valencia and Palma (Majorca).
The first Jews to leave Spain settled in what is today Algeria after the various persecutions that took place in 1391.

It seems in Judaism, each division of jews has it own Siddur and different Jewish rites:

Judaeo-Spanish (also Judeo-Spanish and Judæo-Spanish: Judeo-Español, Hebrew script: גֿודֿיאו-איספאנייול, Cyrillic: Ђудео-Еспањол), commonly referred to as Ladino, is a Romance language derived from Old Spanish. Originally spoken in the former territories of the Ottoman Empire (the Balkans, Turkey, the Middle East, and North Africa) as well as in France, Italy, Netherlands, Morocco, and the UK, today it is spoken mainly by Sephardic minorities in more than 30 countries

The initial development of typefaces for the printing press was often anchored in a pre-existing manuscript culture. In the case of the Hebrew press, Ashkenazi tradition prevailed and square or block letters were cast for Biblical and other important works. Secondary religious text, for example rabbinic commentaries, was however commonly set with a semi-cursive form of Sephardic origin. This was ultimately normalized as the Rashi typeface.

A corresponding but distinctive semi-cursive typeface was used for printing Yiddish. This was termed vaybertaytsh, where the Yiddish word vayber mean “women’s”, and taytsh means to render something intelligible in Yiddish. (Works printed in vaybertaytsh were largely intended for a female readership.)

-Vaybertaytsh- is the type family used for most Yiddish texts (and
some-non Yiddish texts) until the late 18th century. 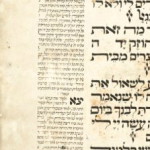